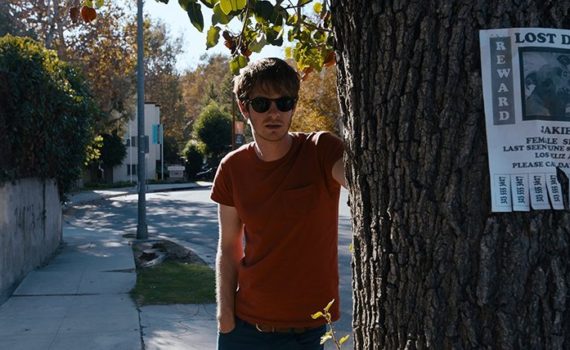 Under the Silver Lake is a Hollywood mystery wrapped in a Hollywood mystery of its own, with delayed releases, cast switches, and unrealized expectations.  This neo-noir, from the director of It Follows and almost nothing else, first starred Dakota Johnson, then Riley Keough, was set to come out in the summer of 2018, then the winter of 2018, then the spring of 2019, and always seemed to be tripping on its own mystique until it became something more of a joke.  An obvious homage to other, more polished Old Hollywood dramodies, Silver Lake stumbled out of the gate and never found its footing, leaving us wondering less what just happened and more what could have been possible.

Sam is hopeless, jobless, and soon to be homeless, living in L.A. and getting sprayed by skunks as he tries to cope with all life throws his way.  A ray of sunshine seems to have temporarily brightened his days when a new girl hops into his apartment’s pool, and when, later, the two hit it off.  But from one night to the next morning she disappears, leaving strange clues in her wake and a desire rising within Sam to solve the mystery of who she is, where she went, and what it all means.  He stumbles, perhaps, on a secret message that’s being spread above the heads of every day people, subliminal hints and covert codes that we don’t even notice and could never possibly understand.  But Sam is intent on figuring it all out, starting with where Sarah went, ending with the meaning of life, and hoping somewhere in the middle he doesn’t lose his car, his house, and his sanity.

From Mulholland Dr. to Inherent Vice, directors love their L.A. noirs, but I’m not sure that audiences can say the same.  We seem to regard them highly, these wacky, sexy, multi-faceted mysteries, but when’s the last time you took one home to meet the folks?  What I mean is, we think this genre is edgy and so kinda cool, and some of us proclaim that we’re huge fans, but I partly think that’s for show, while deep down these plots are rubbing us the wrong way.  David Robert Mitchell tries his hand at the style, crossing Hollywood auditions with clever dames and painting the town red, but it never really works the way you can feel it’s supposed to, and that’s no shock, considering how hard the movie was to make and release; it really shouldn’t be this difficult.  Real art comes from within, it isn’t tortured into existent, and that’s how I feel this movie comes across, as forced.  Garfield is good, the sexuality of the film is fun, I was curious most of the way through, but the plot is mostly messy and you won’t leave your seat satisfied, because I doubt anyone within the cast or crew wholeheartedly believed that they were creating something magical special.