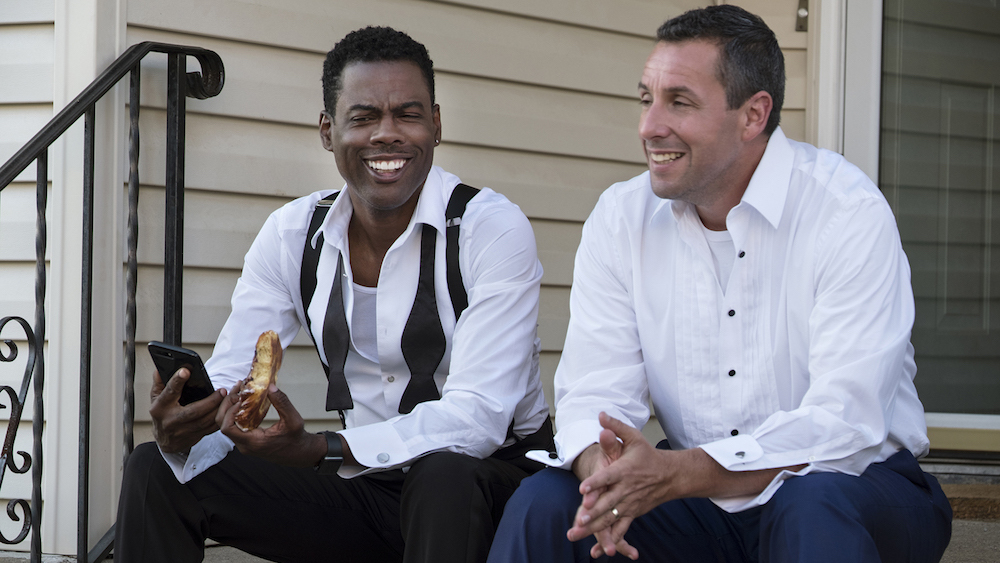 I really hate to admit it; I partially enjoyed a straight-to-Netflix, astoundingly-dumb, throw-away Adam Sandler flick.  In my defense, my in-laws made me do it, but in their defense, it wasn’t all that bad.  No one expects much of Adam Sandler, which may be his superpower; he releases a dozen idiotic movies in between every shocking success and we’re caught off guard every time.  The Wedding Singer, Punch-Drunk Love, The Meyerowitz Stories; all great, all out of nowhere, and I’m looking forward to Uncut Gems, so Sandler remains a mystery who can do great work, as long as you don’t expect it all the time.  Mostly he’s going on vacation with his celebrity friends and making up a stupid movie on the fly, the result of which is usually not pretty.  But The Week Of kinda sorta works a little better than you might expect, showing flashes of real promise, mixed with moments, of course, of total buffoonery.

Sarah is getting married to Tyler, and their families are flipping out about it a little.  All in good ways, they couldn’t be happier for the couple, but the week before the wedding isn’t going to be a relaxing time, it’s going to be the most insane few days of their new lives together.  At the heart of it all is Sarah’s dad Kenny, who wants to please every one around every corner but doesn’t have the budget to pull it off, not by a long shot.  You know who does; Tyler’s dad Kirby, but Kenny is too proud to take his help, and he wants to make the wedding perfect for his little girl.  An uncle with no legs, a leaky hotel, a corrupt mayor, a deliver of human-sized alcohol bottles, a hundred different bizarre misfortunes; this week is going to go from wild to catastrophic in the blink of an eye, and only the love of extended family can hold it all together before everybody snaps.

A bit of homage to Father of the Bride, Sandler’s The Week Of is a fun romp through a stressful time, with a message at the end that the love of family is strong enough to overcome any obstacle.  Along the way, we do get to see a peek at that strange talent from Adam Sandler that keeps us coming back for more, that lovable ability to suck us in and convince us that his character is someone we could already know.  So that’s great, but we also see way too much of the idiotic sense of humor that emerges when he’s around his pals for too long, and the depths to which his jokes will sink if allowed to be set free to their own devices.  Rock was underused, Buscemi was dumb, too many of the story lines were juvenile, the ending raised the bar a little, but the project as a whole is an up-and-down ride of good, bad, and ugly.  You might end up liking the film more than you thought you would because Sandler is a teddy bear, but the rest of its content deserves a warning label; it’s the combination of the two that ends up allowing The Week Of to float on as something funny, if not anywhere near fantastic.