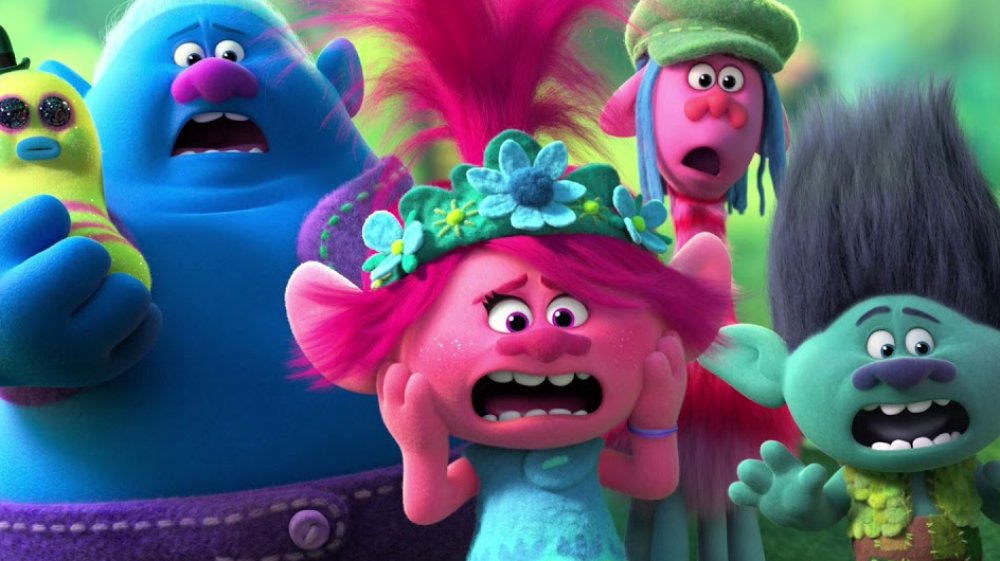 If Trolls was a 90-minute pop song that you kinda liked, Trolls World Tour is a 90-minute Netflix spin-off episode that your kids made you watch and you barely survived.  I liked the first enough, or should I say I allowed myself to like it, because it was catchy, it was fun, it was silly, my family enjoyed it, and so I did too, by proxy and perhaps reluctantly.  But the sequel is every misstep that the original managed to sidestep, every single stupid error in judgement that we were so worried about before, come back to haunt us when we thought we were clear.  I can’t stress this enough; this isn’t even really a movie, it’s more like some cash-grab series on a streaming service that grownups aren’t meant to watch.  I wish I could go back in time and be one of those lucky adults who haven’t seen this, but it’s too late for me; save yourselves!

So Poppy has become the Queen of her troll clan, but little did she know that there are other Trolls scattered across the land, and that she’s about to become much more familiar with them.  First, some history.  Apparently all Trolls used to live in peace and make music together, back when all things were happy.  But that utopia was broken, and the Trolls took their music to their own territories: Pop, Country, Funk, Classical, Techno, and Rock.  Back to the present, Barb the Rock Troll Queen wants to get the band back together, but her idea of a reunion is simply to shut down the other shows and make everyone play her music, because obviously Rock is the best.  Poppy, the ultimate optimist, thinks that she can convince Barb to be her friend and to give up her power trip, but Branch isn’t so sure that’s possible.  Off they go on an adventure to save the world from having its good differences eliminated; life is too large for only one song. Did we know during the first movie that those Trolls were Pop Music Trolls?  I get that the main character’s name is Poppy, and they definitely sang pop music, but I thought that was part of the happy shtick, I don’t think they were specifically only about pop music, unless I’m misremembering.  This movie seemed to take for granted that we knew the whole time what I think they might have just made up on the spot.  That bothered me for some reason, I didn’t like it, and that premise is something the entire story is based upon, so I had trouble getting on board.  We were supposed to be learning along with Poppy, finding out about the world with her, but she’s a really shallow character, one that’s supposed to be picking up a hundred lessons in the span of just over an hour, and it simply didn’t work for her or for us.

This isn’t a movie; it’s an episode.  My kids watch some really thin shows on Netflix that are based on hit movies, and that’s fine, that’s a genre, spinoffs exist, but they’re made for children; they’re short, they’re just entertainment, they don’t try to be anything but useless fun.  The problem comes when you try to take that recipe out in the open water and think it’ll float the same, because it simply doesn’t.  The plot was stupid, the lessons scattered, the music spotty, all reason to watch thrown out the window so quick that it’ll make your head spin.  Everything that worked the first time failed the second, because no one was invested and nothing was laid down skillfully.  The characters were ridiculous, the songs were weird, Barb made very little sense, guest stars popped up everywhere they were unwelcome, and halfway through I felt like I was being dragged across jagged jokes & stale plot lines to my doom.  Trolls World Tour is more torture than true storytelling, and that’s a huge disappointment, especially since we’re all at home watching as if we’d headed to the theatre; if we had we’d have walked out mad.