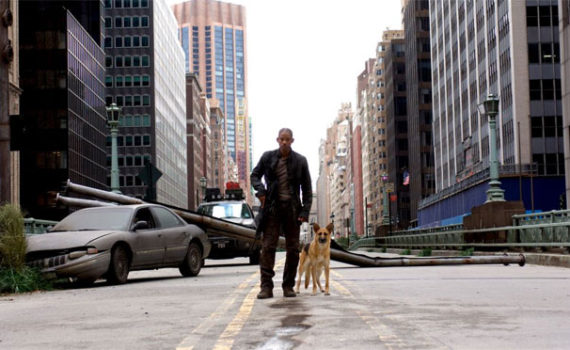 I’ve been slightly into vampires lately, mostly in book form, so I thought I’d finally watch I Am Legend, which I knew was a post-apocalyptic movie but which I thought I had heard focused on vampires as the monstrous form humanity took in the wake of its own destruction.  Turns out that was only partially right, because yes there are creatures that avoid the light, come out at night, and seek human blood, but they are far more zombie-like than vampiric.  That was a bit of a disappointment, and so was the film as whole; it was shockingly dull and created almost solely on recycled garbage, with an ending that will make you swear off cinema all together; not great, Will.

Colonel Robert Neville, an Army man and a brilliant scientist, is the last human left alive in New York City.  Well, there are others present, but they aren’t exactly human any longer.  There was an outbreak of a virus that was meant to cure cancer, but it has done anything but, breaking down humanity to their basest and most bloody desires.  Now, all alone because he is immune, Robert hunts NYC for the undead in order to use them as test subjects for a potential cure, using his own blood as a base for the vaccine.  With his trusty dog Sam at his side, Robert tries to survive the monsters and the loneliness, as he labors forward with what, for all he knows, might be mankind’s last hope.

God, what should I have expected, with a director like Francis Lawrence.  Constantine, I Am Legend, Water for Elephants, Hunger Games 2, Hunger Games 3, Red Sparrow; not the best filmography.  Dude is basically a music video creator who thinks he can make epic adventures, and he simply can’t, not to satisfy good taste anyway.  His movies are formulaic, they’re indulgent, they focus on the big instead of the little, and that weak approach is very evident in this film.  The virus element is cool, Will is likeable, I loved the dog, but then when things start to actually happen you start to feel disappointed, because it’s not high quality.  The monsters look stupid, the CGI is awful, the characters at the end are completely pointless, and the climax is hit-yourself-on-the-head-and-close-your-eyes-to-the-horror bad.  I Am Legend may have made a splash when it was first released, but I wouldn’t recommend checking it out again or now; there are much better options available many different places.