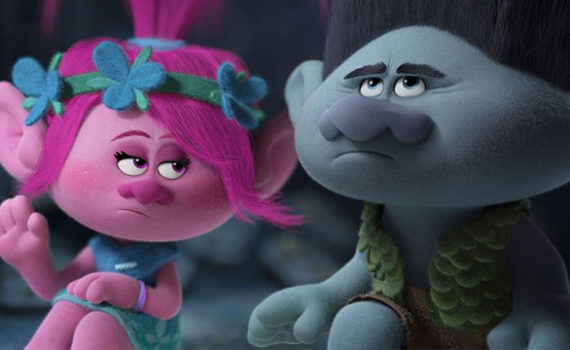 If Boxtrolls can be seen as animation for the dark, twisted, and artistically inclined audience, Trolls should be labelled as the exact opposite.  It borrows wheelbarrows full of ideas from the former, rolling them into the room as original ideas, something that won’t sit well with those who enjoy Laika and all they work so hard to do.  Sure, there’s some new content brought to the party, there’s music galore to gloss over the flaws, there’s a continuation of the current trend to bring pop songs to the children’s fantasy genre (Epic, Strange Magic).  But the entertainment value of the film can’t completely override the copying of plot, the goofiness of jokes, and the redundancy of theme that you’ll witness if you sit down with your kids to watch a movie that’s a surface good time & not much else.

In the land of the Trolls, all is happy and bright.  They lead simple lives, sing the day away, always stay positive, love each other, give hugs every hour on the hour, and generally enjoy every moment of their precious lives.  But that all ends when the Bergens come, a race of evil, ugly, hapless, joyless, large, lumpy creatures who can’t find happiness for themselves.  They fence in the Troll Tree and begin eating Trolls each year, a tradition that they think is the only way they can ever be fulfilled, consuming gladness instead of producing it themselves.  The Trolls do escape, hiding in the deep forest, and twenty years of peace go by.  But when the Bergens discover the Trolls’ hideaway, when many are captured to become the main course of a feast, it’s up to Princess Poppy and her reluctant friend Branch to save the day.

I can’t lie and say I didn’t have a little fun watching this movie or that I haven’t enjoyed the peppy soundtrack since, but that’s about as far as the positives go, and they can’t conceal the inherent flaws behind the film.  First, Boxtrolls is so much better, so much more interesting and well-made, something for a more advanced audience.  Trolls just doesn’t challenge you at all, it only sparkles, and while that’s fun for a time, it doesn’t last long.  The humor is ultra-silly, the characters are caricatures, and the villain Chef mirrors Archibald Snatcher way too closely.  But then there’s the music, and that’s where the movie will get you.  Good pop choices and cool original music; the soundtrack is where it’s at, Kendrick & Timberlake both being real talents.  Watch with your kids for a few laughs, but don’t expect real magic here; Trolls is all about the sauce, not the meat.