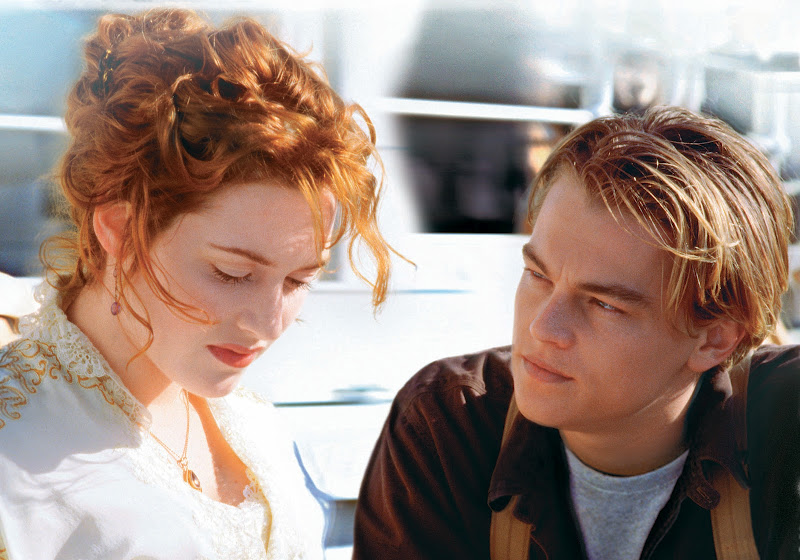 I recently wrote about Leonardo DiCaprio as a young actor when I reviewed Romeo + Juliet, so I won’t dive into that again, but can we take a second just to acknowledge how wonderful he is?  As good an actor as he is good-looking and as talented today as he was twenty years ago, that so rarely happens that it deserves some special attention.  Leo is a living legend, just received his first Oscar for The Revenant, but could have been awarded countless times before that.  Titanic was such a spectacle when it came out and has been so loved ever since that perhaps we missed a simple fact; Leo is incredible in his role as Jack.  Can you imagine any other actor playing the part?  Not to take away from the rest of the cast, because basically they were all great, but Leo was magical, and that should be said.  Anyway, on to the movie, which is one I’ve seen a hundred times and will earnestly watch one hundred more.

We all know about the fateful sinking of the great steamer the R.M.S. Titanic, but here is a fictional love story set on the colossal ship to give us some personal connection to that historic disaster.  Rose DeWitt Bukater, soon to be Rose Hockley when she marries her wealthy betrothed once the Titanic reaches America, feels trapped in her posh existence.  Her mother controls here, soon Cal Hockley will too, and her entire life seems already decided.  To escape the trap, Rose runs to the back of the magnificent ship in order to jump overboard, but is saved by a poor young man named Jack Dawson.  Jack is an artist, a free spirit, a handsome & carefree lad, and Rose falls for him hard.  The two save each other from the lives they might otherwise have led, but can they survive the sinking of the unsinkable ship and the evil plots of a jealous fiancée? Titanic is mostly perfection sprinkled with a few moments of near-perfection, wrapped up in an epic bow, and served to us with a side of heartbreak.  I can’t help but be a tad over-dramatic when talking about this film; after all, I saw it when I was 14, having only recently become old enough to go to the theatre by myself to see more “risqué” movies.  That seems silly now, but at the time I had to convince my parents that I could watch a steamy romance with friends, that any nudity would be artistically done.  I’m sure I still have a crush on Kate Winslett based upon this movie and that scene, but even all these years later I can also enjoy this film as a critic and an aficionado.  It will always mean something to me, and I’ll always remember my sister sobbing at the end, no matter that she had already seen the movie four times in two weeks.

But nostalgia aside, Titanic is a spectacular feature.  For one, is literally a spectacle, with groundbreaking graphics and unbelievable scale.  Cameron has always been on the cutting edge when it comes to technology, this movie being no exception.  People think he broke ground with Avatar, but Titanic was no small feat itself.  And like all great epics, the soundtrack must support the film, and boy did it ever.  I still sing My Heart Will Go On, and that song will always bring images of this film to mind.  The story, plot structure, flow, timing; all impeccable, and to quickly touch on the idea of ‘films’ vs ‘movies’, this is one of the best ‘movies’ ever made, a giant gift to audiences that contains everything we could possibly want.  And lastly, the acting, which taken individually might not seem amazing at first, but when fitted together like a puzzle shines in a way that few ensembles have before.  Leo of course, but Kate as well, with Billy Zane playing one of the most detestable villains of all-time.  I can’t wait to show this film to my kids, and I hope they feel the same thing I did at that age, because this is definitely a story meant to be internalized by the impressionable, but one that can also be enjoyed everlasting.