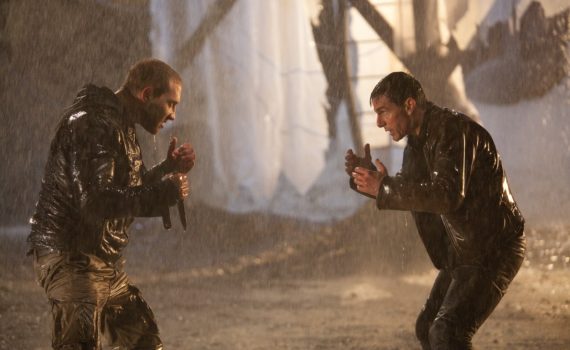 I didn’t see Jack Reacher when it first came out; that’s not my style of movie.  I understand the fun, action genre, I get why people want to watch, but it’s just not for me.  I usually stand around the periphery waiting for something that’s surprisingly good to pop up, then I can swoop in and enjoy.  Cases is point; Edge of Tomorrow and M:I5, which happen to both be written by McQuarrie and star Tom Cruise.  The two often work together, teaming up in Valkyrie as well, and seem to be a solid duo.  When I saw the new trailer for Never Go Back, I decided I had better in order to watch the first film, an action flick that perhaps I didn’t give enough of a chance.  Well, I should have heeded their advice, stayed where I was, and avoided this franchise, despite the talent behind it and its team’s other successes.

When a military-trained sniper kills a group of random people outside a sports arena in Pittsburgh, the prosecution has an open-and-shut case and will use that power to end this man’s life.  But before he is knocked unconscious by angry inmates while awaiting his trail, the alleged shooter asked for Jack Reacher.  Who is Reacher, where is Reacher, and what is Reacher, these seem to be the questions of everyone’s mind.  Well, he’s about to show up and you’re about to find out.  Jack Reacher is an ex-MP for the army, a professional investigator, a practiced killer, and a man you do not want to mess with.  Teaming up with a young, idyllic lawyer, Reacher will solve the case, getting to bottom of what really happened on that fateful day.

It’s bad, let me just put that out there.  I know it’s a genre, I get that it might be a little campy, I understand that this isn’t a film for the most cerebral of audience members, which is putting it kindly/lightly.  But this movie is bad, and I can’t accept otherwise.  Jack Reacher is no Mission: Impossible, no Tom Cruise as his best, action extravaganza, fun for everyone, shoot-em-up, summer blockbuster self.  It’s only bad, and that’s a major disappointment, since I already bought my ticket to see the sequel.  Reacher knows everything in the stupidest way possible, having all the answers before the answers even exist.  He can also fight any number of anyones and solve any problem, even writing notes with words on them that will only make sense to lesser people later.  The whole movie was a giant slap in the face to our collective intelligence, with a plot that only a mother could love.  Cruise phones it in, Pike was sexy but miscast, Courtney was terrible, and only the strong side actors could possibly save the day: Richard Jenkins, David Oyelowo, Werner Herzog, Robert Duvall.  The rest of the film was bad fighting, obvious twists, and a general pandering down to everyone watching.  And what’s more is that I now expect the second one to be even worse.