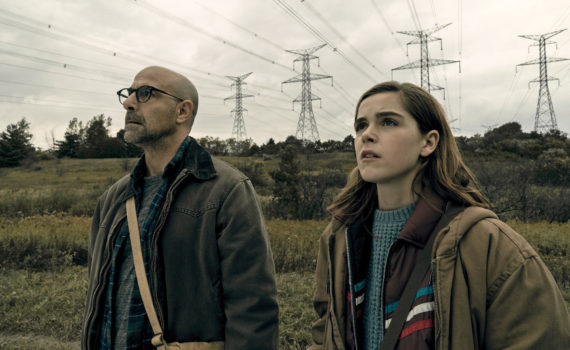 I’m gonna try my hand at the hold-my-beer thing; here goes.  Bird Box said, “I can make a terrible version of A Quiet Place“, and The Silence said, “Hold my beer.” Boom!  Roasted, suckas!  And while that’s obviously ridiculous, it’s honestly how it looks to have happened, because no one could have made something as bad as The Silence on accident, it must have been in response to A Quiet Place, and it must have been intentional.  If it wasn’t, if people came together to make a movie that they thought was good & original and this was the result, I’m not sure I could go on believing in happiness anymore.  It’s such an obvious ripoff, it’s so obviously awful, that I can only hope it was sabotaged from within and this is the result.  Otherwise, Netflix, you’ve got some explaining to do.

A caving expedition in the Mid-East accidentally releases a plague of flesh-eating creatures on the US, which quickly spreads and becomes an epidemic that returns us to the Stone Age.  These creatures are everywhere, they’re always hungry, they fly about above our heads, and they will chew you up if you go outside.  But the Andrews family figures something out about the terror-dactyls on their way to escape the big city; they can’t see you.  They only hunt by sound, which is oddly fortuitous for the Andrews, since their daughter was recently struck deaf and the entire family subsequently learned sign language.  Now they have a fighting chance, as long as they stay silent, and as long as other humans don’t mess it all up by being greedy, evil, and downright dumb.

Speaking of downright dumb, may I introduce you to this movie.  It’s hideously awful, overarcingly stupid, and an embarrassment to all involved.  I’m still gonna hold out hope that it was intentional somehow, but I’m already starting to doubt that.  How someone could have watched A Quiet Place, ripped off everything, pitched the idea to Netflix, and got their work approved I will never know.  It’s idiotically similar, and I can’t believe professional pride didn’t get in the way of some people at least; Stanley Tucci I’m looking at you.  And I don’t usually pick apart sci-fi plots, where’s the fun in that, but this story is ridiculous; apparently there were so many of these creatures underground that they now cover the skies over every single house east of the Mississippi and have caused 99% of humanity and animal life to disappear in a day.  Umm, right, no thank you, that doesn’t make sense, on we go to the acting, which was abysmal; this time I’m looking at Mirando Otto, who Otto not be an actress.  Bam!  Combine this plot and these actors with the director of Wish Upon and you’ve got something especially grotesque on your hands, a film that I hope goes down in history as the definition of a failure.