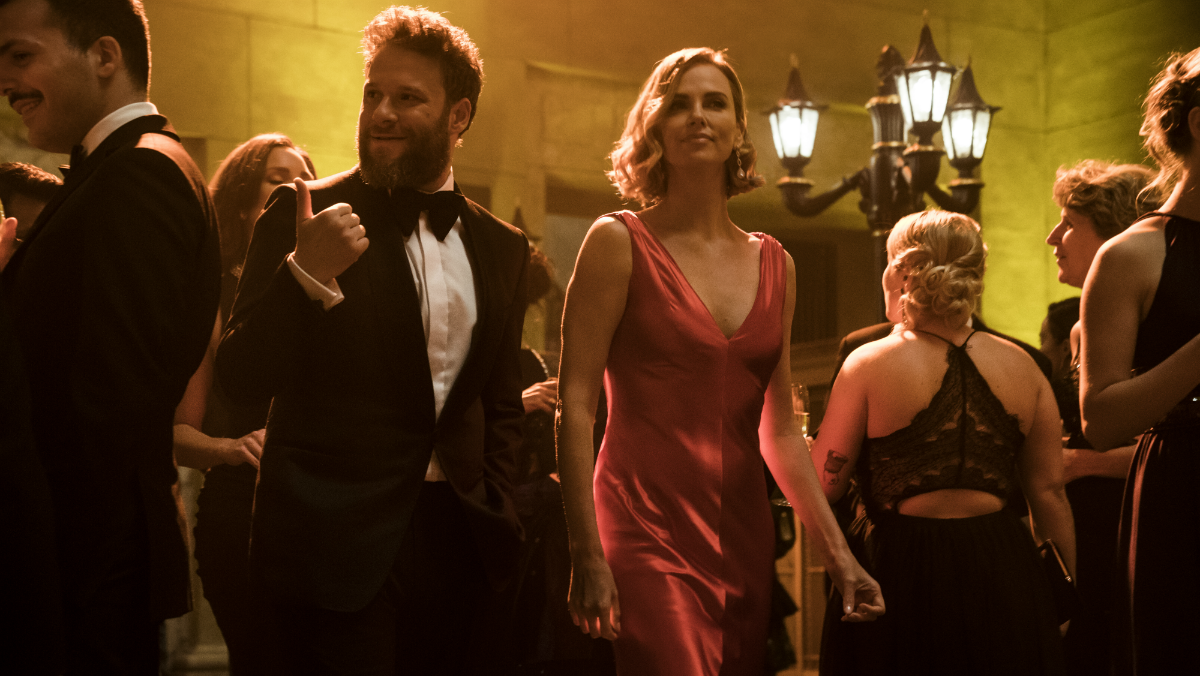 I’d be fine with letting the rom-com die, but Seth Rogen and Charlize Theron seem bent on saving it with their performances in Long Shot, and I guess that’s OK too.  Director Jonathan Levine doesn’t help, he’s no good, but he didn’t need to be; the actors picked up the slack whenever he didn’t carry his weight.  The result is a comedy that’s, I guess, romantic, but also raunchy, wrong, political, and poignant, covering so many bases within two hours that you’ll want to go back and watch it all again, to make sure you got all the points and maybe to relive some of the best gags.  Those who already dislike Seth Rogen won’t be struck the same way though, and Fox News viewers beware; this film isn’t for you.  But the rest of us are here for the party, and the quality of the bash is just good enough to warrant our recommendation to friends.

Journalist Fred Flarsky has recently lost his job, lives by himself, can’t get over the injustices of the world, and could probably use a little personal hygiene.  In summary; Fred’s a mess.  But he attends a party with his rich friend Lance, and there sees a woman who couldn’t be more of a blast from the happier past.  Charlotte Field was once Fred’s babysitter, when he was 13 and she was 16, but is now Secretary of State, and could be on her way to becoming the first female President of the United States.  She & Fred reminisce, and she eventually hires him to be her speech writer, as she needs someone who knows her personality, who is funny, who cares about the environment, and wants equality for all of Earth’s people; well, maybe not Republicans.  Basically, Charlotte has accidentally stumbled upon the perfect partner, but when the pair start to fall for each other, politics will surely get in the way. Let me touch a little on the politics of the movie first, because they are pretty blatant; you may not want to watch this if you’re a Right Winger.  There is a small moment where we’re supposed to learn a lesson about reaching across the aisle and remembering that politics don’t define us, but I kinda feel like someone was forced to throw that in at the last moment, that the film’s heart was not behind it when it tried to say that Republicans might be people too.  A larger message throughout is definitely that Fox News is evil, that corporations behind politicians are bad, that the environment is important, and all that jazz.  Just saying; this is definitely a comedy for Liberals, who may be all Seth Rogen has behind him anyway, I can’t imagine many conservative parents agreeing with their kids that that dude from Knocked Up who smokes pot all the time is hilarious.

But he is, at least I think so, and he showcases his talent here wonderfully.  Who’d have guessed, years ago, that he’d have such natural charisma, and now he’s branching out artistically, which is really cool, but here he sticks to acting, and that’s fun to watch too.  Charlize Theron is the perfect balance to his schlubby demeanor; lovely and polished and mature, but still with a comedic side that shows itself at opportune moments.  They play well off each other and the rom-com aspects work, when we know how seldom any film can claim that.  Some criticize the ugly guy/hot girl trope as unrealistic and unfair, but hey, Rogen isn’t hideous, Theron is just a woman, it isn’t so ridiculous to think they could hit it off, stop being so weird, everyone.  The film is funny, it’s fun, it’s kinda sweet, the direction is pretty poor, exemplified often in the pacing, but everything works out anyway, mostly because these leads didn’t really need to be told what to do.  And the side cast is great: June Diane Raphael, Ravi Patel, Bob Odenkirk, Andy Serkis, Randall Park, Alexander Skarsgard, Lisa Kudrow, Boyz II Men.  Long Shot could very well be one of the best modern, offbeat, romantic comedies since Sleeping with Other People, and I thought that film was wonderful; it was more introspective, while this movie is more physical and political, but both work, and both are showing filmmakers the direction that this genre should be taking.