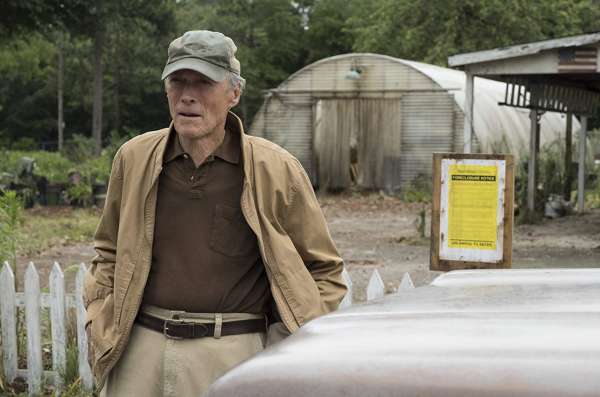 Million Dollar Baby ought to have been Clint Eastwood’s swan song, because it’s only been downhill from there.  Who am I to tell a legend when to hang ’em up, and it’s easy to say this in hindsight, I know that, but he’s lost the touch, and I really don’t think he’s gonna get it back.  His films and his starring roles since Million Dollar Baby have been mostly poor, with a few mediocre thrown in, and it seems obvious that he needs to follow Robert Redford’s lead and go out on his own terms before audiences simply aren’t interested any more.  The Mule is just another example of a poor movie done by an icon who doesn’t have what it takes any longer, and who needs to admit it to himself.

Based of a true story, an elderly veteran and horticulturalist named Earl Stone becomes a drug mule for a large cartel, avoiding capture due to his age and impeccable driving.  Earl chose job over family years ago, becoming big in the flower world, but despised in his own home, failing repeatedly to show up for his wife, daughter, and granddaughter when they needed him most.  Facing the eventual failing of his business, the prospect of losing everything, and having nowhere to turn, this old man would chance upon a seemingly simple job; just drive.  Don’t ask what’s in the back of your truck, don’t make too many stops, don’t speed, just drive, leaving your truck at a hotel for an hour and returning to an envelope of cash.  It was so easy, and also addictive, as Earl began running drugs for a cartel, never completely grasping the extreme danger he was putting himself in, and never knowing that the DEA was right behind him.

Clint Eastwood will be 89 this month, and while I have no interest in being ageist, I just wonder if time is up for this legend of the screen.  He no longer packs the emotional punch in his roles and in his films that he used to, and there has simply got to be a point where you’ve given all you can give to the art.  More power to him if he wants to work until the moment he drops dead doing what he loves, I can get behind that, but I can’t really get behind watching his movies unless they improve.  The Mule is an interesting story, but other than that has very little to offer.  Eastwood is fine as Earl, but kind of racist, Cooper is fine as a special agent, but kinda boring, and the rest of the cast is pretty bad: Dianne Wiest, Alison Eastwood, and Taissa Farmiga are all absolutely awful.  And the plot is pretty dull after a while, not leaving audiences with anything to grab onto or enjoy, it almost isn’t enough to warrant comment, a toss-away flick that’s below the talent once displayed by this man.