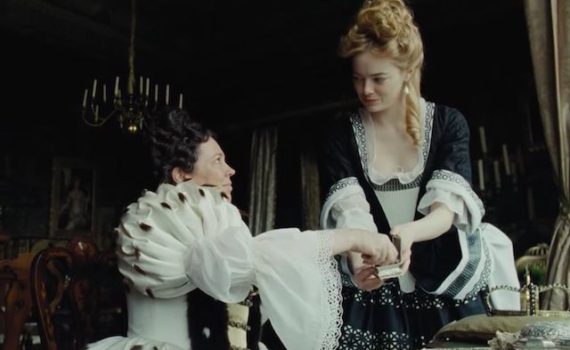 Greek director Yorgos Lanthimos moved into our American view with the weird hit The Lobster, and further impressed with the even stranger The Killing of a Sacred Deer.  I was lucky enough to stumble across one of this earlier films some years back, Dogtooth, and now here we are with The Favourite, as audiences everywhere begin to understand that we might be in the presence of genius.  Other than another movie, Alps, that’s basically the Lanthimos canon, and while we will all have our favorites, I think Dogtooth and Sacred Deer are both exquisite, and I prod you to check them out, if you’re up for something more than a little wacky.  The Favourite is his newest and perhaps his most polished, and what’s more it has a realistic chance at being nominated for a host of Academy Awards, its leading ladies putting on an acting clinic with the support of one of the best directors working.

Queen Anne of England is as mad as she is lonely, the combination leading to an odd friendship in which Lady Sarah rules the country because she watches over the feeble Queen and pretends to care for her very much.  Perhaps it’s a form of love instead of simple hunger for power, but the line has become blurred, and while the Queen cries like a baby Sarah takes control over matters of state, she and her husband doing whatever they decide is in their own best interest.  But two parties give Sarah challenge: Harley, the leader of the opposition in Parliament, and Abigail, a newly -rrived maid who used to be a lady but whose family has fallen far.  Now Abigail wants to move close to the Queen, to gain her ear, and thus gain prestige, but Sarah can’t allow that to happen, and the two will begin a corrupt, covert, and often comical duel for the mighty seat that sits in the shadow of the throne.

The Favourite won me over slowly but steadily, from an unusual air at the start to a surprising conclusion at the end, and with a host of rarities in between.  Lanthimos has perhaps the most absurd humor to ever be deemed acceptable, but we’re lucky that he somehow strikes the right chord more often than not, because what we get from him we most definitely do not get from anyone else.  It’s comedy and depravity and wit and debasement coming at you in waves, and perhaps the fact that we’re constantly on our toes leads to these wonderful and challenging experiences.  Stone & Weisz are an extraordinary duo, one just peaking and the other having been an acting standard for twenty years.  But it’s Colman who commands the stage, and who has the best shot at an Oscar; she’d get my vote if I were asked at this moment.  The Queen is insane, pathetic, and stupid, but somehow also endearing, and Olivia gives us glimpses of a depth within the character that makes you lean forward and invest yourself much more than you thought you would when you sat down.  And lastly, though it’s a small part, I have perhaps never seen Nicholas Hoult this composed and impeccable, and I’ve watched him in dozens of movies as he’s grown up, but this might be his most perfect role.  While not exactly for the masses, since Lanthimos obviously does not care if you’re uncomfortable or if you’re laughing along, The Favourite is nevertheless one of 2018’s very best.