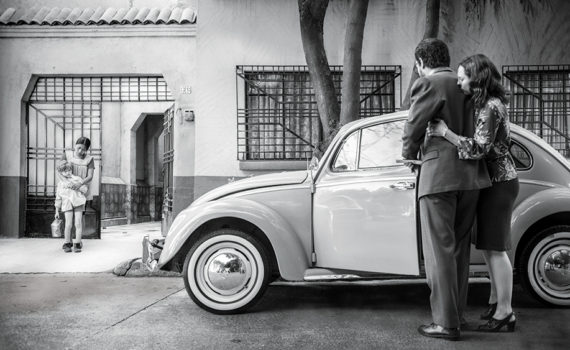 I remember Gravity as visually impressive but lacking the necessary content, relying too heavily on one actor who wasn’t talented enough to carry the load and the use of a new technology which was incapable of replacing good, old-fashioned filmmaking.  While critics were raving about Cuaron’s feat, I was sitting back wondering what else he was capable of, because I had seen him successful before (Great Expectations, Children of Men) and was ready to see it again.  Roma is the film I was waiting for, a minimalist approach to tell an honest story, and, really, what else could we possibly need.  This movie makes the praise for Gravity seem juvenile, because this is what Cuaron was capable of, this is what was inside him, and here critics were praising Sandra Bullock’s tears for floating around in space.  Roma is on a completely separate level, and should be considered perhaps the very best of the year.

Treat this story as a time capsule that has just been opened, a transport back to 1970 in Mexico City to see what life was like for families during this fluid time.  We meet a moderately wealthy household where the father is a doctor and the mother stays at home , where the four children play and learn and fight and grow, where the maids do all the work around the house so that the family can live the life they’ve grown accustomed to.  Cleo works especially hard, and is especially loved by the children, who see her almost as a second mother.  She tucks them in bed, she brings them food, she cleans up after their dog; Cleo is the lifeblood that makes the home a living thing.  We watch as a year passes by, bringing with it a multitude of changes, pushing the family in directions they never knew they would have to stretch.

Roma is perfection, from the first shot to the last, I can’t think of another way to say it; if any movie has ever been perfectly executed here it is.  Cuaron treats every shot as a visitor to this particular world, as a spirit floating in the corner watching the activities of a family that could be any of ours, but is obviously specifically personal as well.  This is Cuaron’s life, this is honest exposition at its finest, and this is the way you make a movie; future filmmakers take note.  They say write what you know, and never has that been exemplified better, or with more heart.  You will cry, I’m telling you that now so you’ll be prepared: you will feel an excess of emotion at many points throughout the story and you won’t know what else to do.  The acting is so natural, Cuaron made sure of that, the sets are so wonderfully vintage, not a single piece looks out of place, and the raw emotion will sweep audiences along until they’re lost within the era as if they’ve never been anywhere else.  Roma is something that comes along maybe once a year, maybe once a decade, a special, honest, simple, wonderful masterpiece that you have to experience to believe.