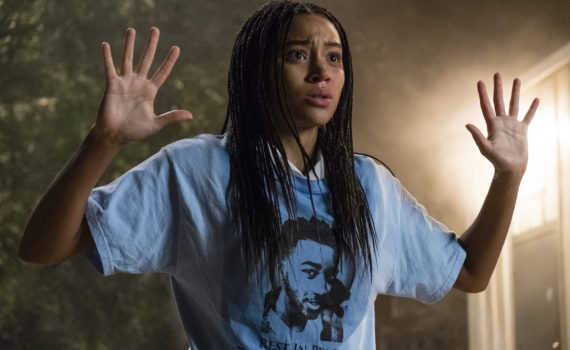 I had low expectations for what I thought would be a YA novel-turned TV movie, but The Hate U Give is stronger than imagined, and does its subject matter justice.  Apart from the quality of the film itself, which perhaps is only mediocre, the topic stands out brightly as something that should be broached in every freshman high school classroom from now on, with this movie at the center of the conversation.  It’s that strong, that important, and although it isn’t perfectly executed, it is definitely fiercely made.

Starr Carter lives a pair of lives simultaneously, Starr Version 1 and Starr Version 2.  Version 1 lives at home with her parents in a rough neighborhood where drug dealers run the streets and kids get shot just trying to play.  Because of this, but unwilling to move, her family sends her to a private school with mostly white kids in a mostly white neighborhood.  Starr is black, feels out of place far too frequently, and doesn’t know what role she has in either neighborhood.  But the death of a friend at the hands of a cop will lead her toward making choices she never thought she’d have to make, to speaking out in a way that perhaps she was born to do. The first hour of The Hate U Give is riveting, as we meet Starr, get to know her family, learn about the difficult position in which she’s been put, and then see firsthand the tragedy that will lead to the meat of the plot of the film.  It’s a topic we need to discuss, and not only does the movie bring it up so that we are forced to face it, but it also leads us in the conversation.  Basically, it doesn’t just say “hey you need to be aware of this”, it also says “come down this road with the characters and see the world from their point of view.”  It’s powerful, Starr’s story, and I really do think it should become an educational prerequisite.

As far as the film is concerned, the second half does become overdramatic, but for a purpose, so audiences won’t completely blame it, but I did start to lose interest toward the end.  Stenberg and Horsby are both incredible, but Hall is ungodly awful, so the acting is a mixed bag, and you’ll have to pick & choose your favorite performances.  I loved the story, the bold concept, and I’ve heard the book is great, so I need to check it out, but I do also think that the movie’s quality is more on par with younger audiences, not those thinking of this film matching up with other potential Oscar nominees.  It’s just not that well-made, it relies mostly on its plot’s energy to carry it through, which many won’t mind but I couldn’t quite ignore completely.  All in all, The Hate U Give isn’t my favorite film of the year, but I recognize its impact, and I hope young audiences watch it in droves.