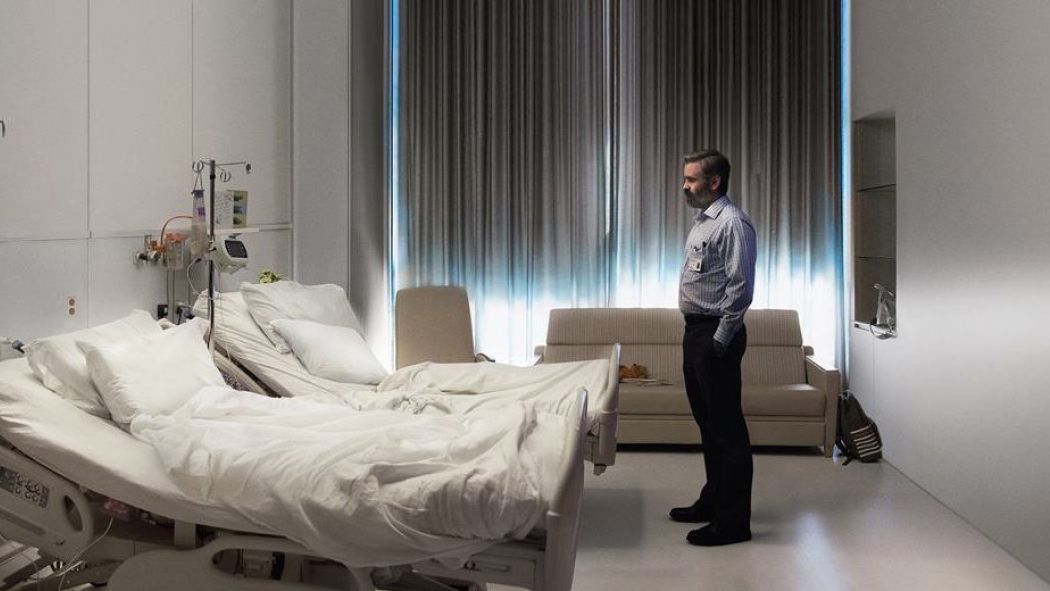 I stumbled upon Greek director Yorgos Lanthimos one late night when I caught a description of his third film, Dogtooth, and decided to give it a whirl.  His third feature overall, but the first that had received any attention as a real prospect, Dogtooth is an offbeat horror/comedy about a family who keep their growing children confined to the home to shelter them from the outside world.  It is bizarre, uncomfortable, graphic, upsetting, but brilliant, and Lanthimos instantly won me over.  His next major movie, The Lobster, received a lot of American attention, but it failed to impress me as a budding fan.  The first half was awesome, the second half a bore, and I was left feeling that Lanthimos made too many correctable mistakes in his step into the spotlight.  I had high hopes that he could learn from them when creating Sacred Deer, that his genius would shine though in an undeniable way, and wow did it ever.

Dr. Steven Murphy is a cardiac surgeon in Cincinnati, where he lives with his wife, daughter, and son.  He’s competent, successful, well-liked, defeated a bout of alcoholism a few year back, and has everything on track once again.  But a relationship with the child of a former patient will derail this idyllic existence in the strangest of ways.  Martin is an odd boy, someone who follows Steven where ever he goes, since the death of his father, perhaps replacing a lost loved one with a suitable stand-in.  It’s harmless at first, how much Martin needs Steven, how much he wants him to come to his house, meet him at a diner, go for drives, invite him over, buy him presents.  It’s simply not a situation that can last, and when it begins to change, Martin makes sure that Steven is punished. Don’t expect your typical thrills from a Lanthimos film; even if the summary sounds familiar, the plot will be anything but.  First, much of the dialogue is complete dead pan, talking about watch straps and house plants without a single fluctuation in tone.  That’s just this director’s style, and it takes a minute to lock into the rhythm of the wacky ways the characters speak, how they interact so awkwardly.  But there’s an incredible sense of humor lurking directly under the surface if you are brave enough to get your face a little closer to the placid water.  Monotone sure, seemingly innocent, yes, but the plot turns funny and then morbid extremely quickly, so don’t get too comfortable.  If you’ve never seen a Lanthimos picture before, you should be warned that he will surprise you with dark violence and shocking sexuality when you least expect it.

This director has been called an evil Wes Anderson, and I can’t think of a better way to explain him.  He’s artistic in an Anderson way, but he heads the opposite direction when it comes to content, going bloody and unnerving instead of bouncy and so pink.  I guess it’s no surprise that I’m beginning to enjoy Lanthimos so much, since I absolutely love Anderson, and perhaps the two have circled back around to meet each other at a very peculiar place of taste.  And there is a taste quality here, this film will not be for everyone, or even very many, as it’s as bonkers as it is beautiful, words that describe another of my favorites of 2017, Mother!.  Farrell and Kidman, who are immediately reunited after their success in The Beguiled, impress again in complicated roles that required every ounce of their talent.  Keoghan, coming off Dunkirk, is a young actor to watch, as are the kids who played the Murphy children, great acting all around.  The film is simply smart beyond its peers, and you could wonder your entire lifetime just what meaning Lanthimos layered behind Martin’s character, what he was representing as he was tearing this family apart, what we can take away from a story that is so unlike so many others, to the point that it is undeniably one of the year’s very best.