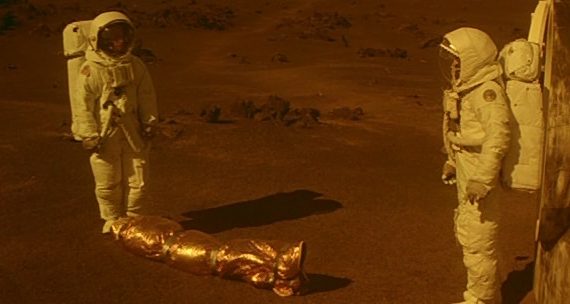 I’ve always been fascinated by Mars missions, and so have American audiences; we want to see them try and we want to see them fail.  Mission to Mars started the modern movement, Red Planet followed and was equally terrible, Doom to some extent, John Carter not really, The Last Days on Mars was good, The Martian was a big deal but not that great of a film other than the fact that Matt Damon is an incredible actor; we’re always ready for a Mars mission to go wrong.  But apparently it’s hard to do the movie version right, which is perfectly exemplified in Stranded, one of the worst genre flicks I have ever seen, void of anything that would have saved the day and without a reason to root for survival.

Humanity has finally reached the point in its technology that we can reach the next goal in near-space travel; Mars.  The first manned mission is launched and, after two years, the team reaches the planet, but that’s where things go wrong.  Their shuttle crash lands, leaving one dead and five marooned, without the necessary resources (food, water, air, fuel) to survive more than a year, which is nowhere near enough time for a rescue mission to come get them.  In order to survive, only two can stay in the shuttle; the other three must take a short walk outside, where they will experience the surface before dying.  But what they find out there makes the sacrifice worth it, because something strange lies beneath the bedrock, something not from Earth.

Stranded hails from Spain, with a director who is in the movie, and it is her first attempt at either acting or directing.  What could possibly go wrong?!  Your first try at acting and you decide to direct yourself, when you’ve never directed anyone, and you expect it all to work out?  What in god’s name was anyone involved in this film thinking.  It’s horrible, obviously, absolutely horrible, like a skit given money but gone terribly wrong.  The acting is so bad you’ll want to be stranded on a planet with no chance of rescue too, just so you’d have to conserve power and wouldn’t be allowed to turn on your DVD player.  I swear some of the actors were dubbed and some weren’t, it was a mess, I don’t know what was going on, and the plot is so stupid that you’ll have to cradle your brain after watching it unfold.  I, unfortunately, already saw this film; learn from my mistake and make sure you never do.