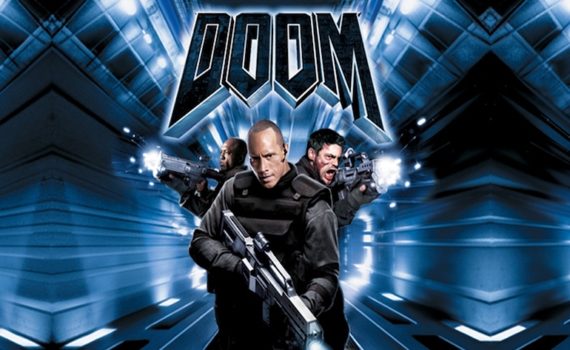 I’ve played my fair share of shooters, though I’m sure I’m nowhere near the level of many men my age.  We grew up in the Nintendo Revolution and were the first gamers, we remember having to blow in cartridges to get them to work, we remember tapping keyboards to make our men move forward toward their certain deaths.  Doom, Duke Nukem, later Half-life, even this strange but awesome first-person alien battle called Area 51; I know what’s up.  These games have a certain quality that we will always remember, and they sparked the fire that lit up the gaming world.  So if you wanted to get romantic you could call Doom a frontrunner, a trailblazer, and even this film fills that role somewhat; Hardcore Henry wasn’t the first movie to put the audience in the driver’s seat of a killing machine.  But that’s only if you wanted to get a little ridiculous; I don’t think Doom was shot with artistic history in mind.

Some years from now, humans discover an ancient, alien artifact in the American desert, a portal that will transport you to an abandoned civilization on Mars.  These Martians were apparently very similar to humans, but had the ability to tap into their genetic material, to make themselves better somehow, to turn themselves into super humans.  What we wouldn’t give to harness that power, so a team of corporate scientists start a small colony on Mars, researching the potential of advancing human biology.  But it’s never a good idea to mess with Mother Nature, especially far from home, and something goes deathly wrong.  Quarantine is called, and a team of special operatives is sent deep inside the facility to find out what happened, why the scientists aren’t responding, and who the hell is killing who.

Apparently Rocks, like wine, improve with age; see what I did there?  But seriously; this was one of The Rock’s first roles, right after his Scorpion King days, and you can easily tell that he’s progressed as an actor, a real actor, especially compared to whatever it was he was supposed to be in this movie.  Again though, I don’t think anyone was confused about what they were doing here; Doom exists to have a good time.  Its homage to the game is brilliant, even doing a small first-person scene, and I loved the running scientists, the gross creatures, the trips down the tunnels, it all worked swimmingly.  But only if you want it to, because, let’s be honest, no awards are heading this film’s way for anything other than its nostalgic qualities.  It’s silly, it’s nonsensical, it’s not well-acted, but I honestly didn’t care.  I had a shocking amount of fun watching, and that’s all I wanted from this throwback.  Urban is a terrible actor, always has been, but Pike isn’t, she just isn’t really asked to do much other than scream.  No one is asked to do too much, which was probably a smart choice, and so no one completely fails.  Doom is something to enjoy if you know the structure of these games, and something not to take too seriously; let it entertain you, that’s all it wants.