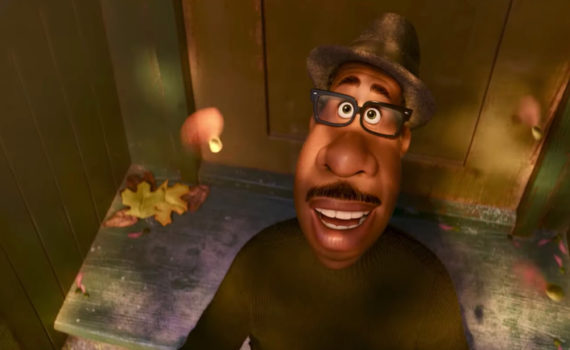 You know how if you try to please everyone you could end up pleasing no one?  That’s Soul, an animated film that tries to be everything, say everything, appeal to everyone, and so can’t possible be the stand-alone marvel that so many of its predecessors were able to become.  Pete Doctor has directed three instant classics, Monsters Inc, Up, and Inside Out, but his latest attempt at toying with an emotion is more an attempt to toy with all of our emotions, to speak to every single one of us and every single part of us, which is only one of many mistakes this movie made.  Despite some exceptional and beautiful moments, those missteps are what I’ll remember, and they dominate a feature that could have been so much better than it was.

Joe is a musician at heart, but a band teacher by occupation.  He’s been searching for his big break for years, his jazz piano extravaganza, but it simply hasn’t come; maybe he’s not good enough, maybe the universe hates him, maybe life is just too short for huge dreams.  And then when the moment appears to be right on the horizon, something terribly inconvenient happens; Joe dies.  Or, at least mostly, but his spirit/consciousness is about to ascend into the Great Beyond, leaving its shell behind, which Joe is in no way ready for.  As he fights to get back to Earth to fulfill his dream, he meets a soul, number 22, who is on its way to life but is too afraid to go.  The unlikely pair will need to help each other through this impossible transition if they ever hope to find their own way to ultimate happiness.

So many things to like about this movie, so many problems along the way.  First, I do think there was too much going on.  There’s the human scenes, the soul scenes, some trippy scenes, some musical scenes, and an entirely too-large chunk featuring a talking cat.  That’s right, a cat, like something straight out of Secret Life of Pets, and that’s where the film mostly lost me.  That section was for kids I guess, but it was unnecessary; Inside Out stayed mature throughout, and it was miraculous.  Soul tries hard to be that film but fails, because it tries too hard to be every other film as well, and that’s the real mistake.  When it succeeded it was being simple and honest and real; the scenes with Joe, his music, his friends & family, all that was near-perfection, and the story should have stayed there because that’s where the magic happened.  The parts with the spirits, with the cat, those were pretty dumb, and brought down the entire feel.  Then came the “moral”, and it was stupid, as basic and underdeveloped as you can imagine.  It was almost as if the entire script was rushed and forced, with actors phoning in lines, not actually feeling them or helping them flow.  Foxx was abysmal, Fey was Olaf, House was a bit much, the other actors were inconsequential, and I fear that this film won’t be remembered in 5 years, let alone stand like its contemporaries as an animated wonder (despite gorgeous animation), simply because it needed to focus its lens much, much more.