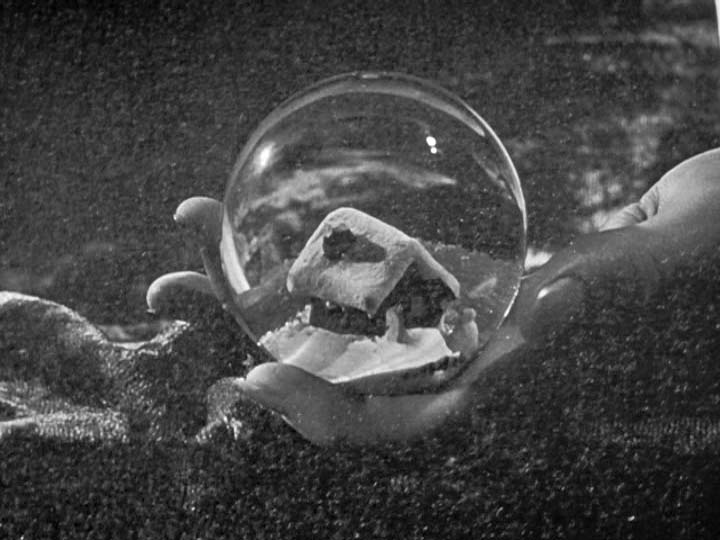 I have a confession to make; I had never seen Citizen Kane before.  I know it’s iconic, I know I’m a film critic, I know that’s one hell of a blind spot, I just never saw it, and I didn’t fix that until just now.  The only reason I made the effort was because Mank was getting Oscar talk and I wanted to educate myself before I watched a movie about the writing of a movie I’d never taken the time to check out.  Well, all fixed, but there’s a reason I was subconsciously hesitant to watch what’s perhaps the greatest film ever made; I didn’t imagine I would think it was so great.  And while I understand the indescribable impact it had on the future of cinema, I have to admit, for being so spectacularly important, Citizen Kane is pretty boring.

Charles Foster Kane, the king of American opinion in many ways and at many times, has died a broken shell of the giant he once was, uttering one last word as his death rolled over him; Rosebud.  What that word means and what Kane was saying to the country is a mystery, but one which must be solved.  To do so, we look back at the life of a newspaper magnate who was as eccentric as the stories he chose to print, a man who came from surprising wealth and spent it in shocking ways.  Kane was a marvel of the 20s and 30s, a mogul unlike any other, a self-obsessed millionaire who was as unpredictable as he was flamboyant.  The story of his life is a puzzle with missing pieces, but to try to fit what’s available together in some semblance of the truth is a task that is perhaps beyond us all.

Of course, the story is a fictional account, but it’s basically William Randolph Hearst, with other tycoons mixed in, and flavored by the writer’s own life, Herman Mankiewicz.  It’s funny how relevant the tale of ridiculous opulence and political power is, how well it fits our current times, like Oil! by Upton Sinclair, which was written in 1926 but could be referring to today.  So the story is fascinating, and it’s incredible that this was Orson Wells’ first real film, both acting and directing.  It’s such an impressive feat, and it boasts a style that was completely new to the century, a way of dramatizing and shooting that changed the way films were made.  For that, we respect Citizen Kane, for it’s impact and it’s originality, for it’s value.  But as a first-time audience member, I’ve got to say, it was kinda dull.  The acting was mostly bad, the writing was super slow, the mood was ultra-heavy; basically it was a task to watch, an assignment really, a job rather than a pleasure.