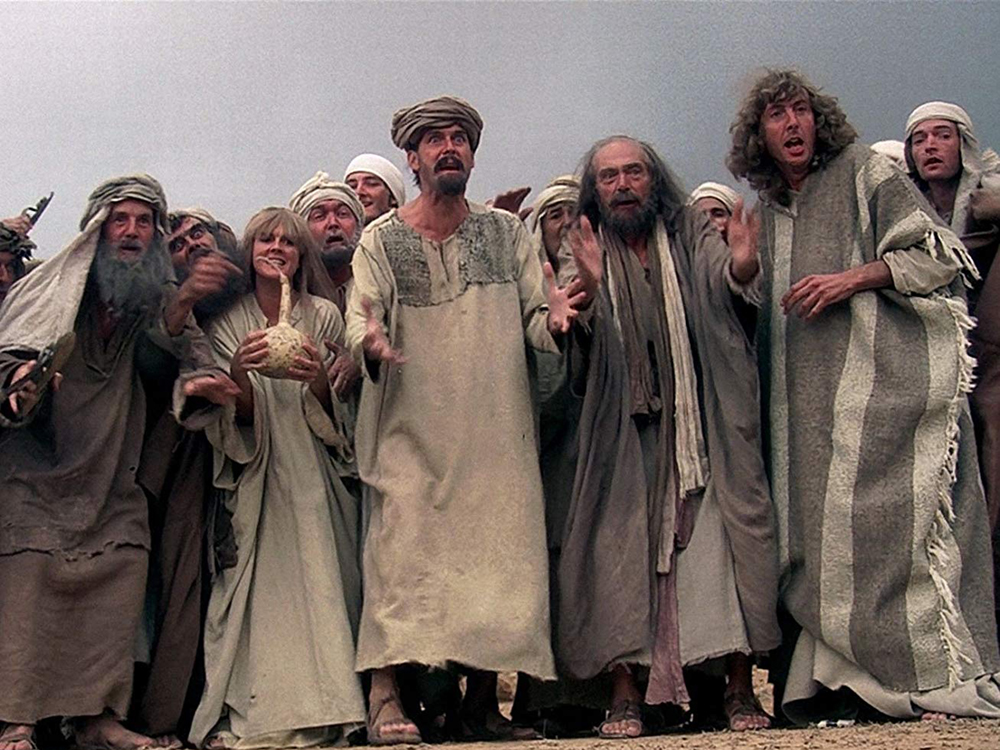 Monty Python simultaneously poked fun at James Bond, Star Wars, communism, and religion in general in Life of Brian; how they had time for musical numbers and Graham Chapman’s penis is beyond me.  Suffice it to say, these men are geniuses, and they can simply work ridiculous magic whenever they choose to, emphasis on ‘ridiculous’.  This film is another step forward in creating a real narrative, after And Now For Something Completely Different, which was skits, and The Holy Grail, which was loosely tied together.  Life of Brian is an actual story, and a clever one at that, filled with patented Monty Python hijinks, of course, and although perhaps not as quote-worthy as some others in their repertoire, still a marvelously entertaining time.

Brian was at first confused with Jesus, and his mom was happy for the presents, until the wise men realized their mistake and found the real son-of-god-lying-in-a-manger-filled-with-hay the next barn over.  And, really, that’s the story of Brian’s life; always second best, always looked over, never having his dreams realized.  All he wants is for his over-bearing mother to leave him alone, for people to take him seriously, and for someone to have sex with him; is that too much to ask?!  When Brian joins the People’s Front of Judea, a revolutionary movement against the Romans, his chance to shine has finally come, but when he is accidentally mistake for The Messiah (again!) he might find that fame has some serious drawbacks.

Finally, a true, story-based movie from Monty Python, but don’t worry; they didn’t leave their ludicrous ideas behind.  Instead, they blended their outrageous comedy with real commentary, on religion, freedom, rebellion, false prophets, and false idols.  There is, shockingly, a lot being said here, under the surface, but the surface is usually so goofy and enjoyable that you don’t even notice the subtle jabs, and even the not-so-subtle right hooks.  And although Life of Brian isn’t as famous as some others, it still carries a ton of iconic scenes: the stoning, the ex-leper, Biggus Dickus, Always Look on the Bright Side of Life.  It’s a film that is, at times, frivolous, but is also funny in the familiar way you’ve come to expect, if perhaps slightly more subtly than you’re used to.  Still, can’t go wrong with a half-Jew named Brian Cohen being mistaken for a prophet and then serenaded on the cross; you wonder how this film would be received if it were to come out today, while at the same time just appreciating that it came out at all.