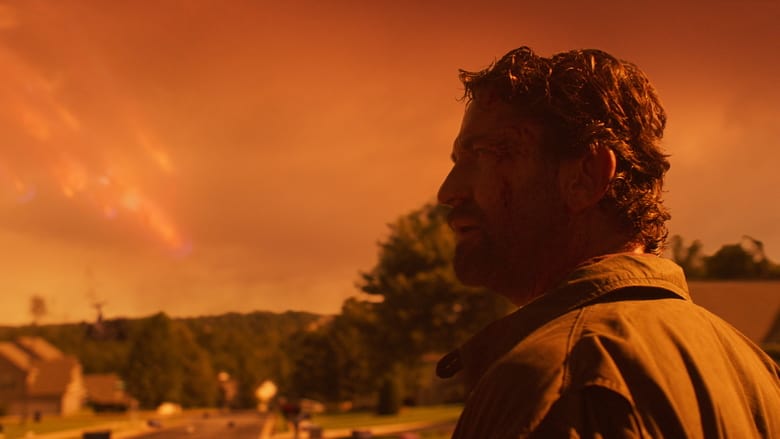 If you enjoyed The Day After Tomorrow, you’ll be happy with a modernized version of the same general tale in Greenland, set similarly in a collapsing ecosystem and focusing on a family dynamic instead of a series of escalating disasters.  Don’t get me wrong, escalating disasters are awesome, Dante’s Peak is one of my cult favorites, and I generally dig any poorly done ARMAGEDDON film, because they’re usually tons of fun despite tons of problems.  But Greenland is different, just like Day After Tomorrow was different, because it doesn’t try to bludgeon us with cataclysm, it pulls us in with heart, and apparently that makes a DEEP IMPACT.

The Garrity family is going through a rough patch; John & Allison might get separated, 7-year-old Nathan is in the middle, and their perfect bubble has been burst without warning.  But you know how they say “it could always be worse”?  Well, that’s true, as the entire Earth is about to find out.  A large, passing comet is going to skim by much closer than predicted, leaving behind fragments that will soar through our atmosphere and cause a variety of damage.  Kept quiet at first, scientists believe that one chunk might bring with it an “extinction event”, and governments across the globe scramble to put as many folks underground as possible, using a lottery system to value some lives over others.  The Garritys are chosen, but first they have to get to the rescue plane, which will not be easy, not in a land gone mad by impending doom.

Setting aside my puns, the genre’s special effects, the over-dramatic acting, the ridiculously dangerous events, disaster flicks are a good time, an entertaining excursion, and that’s why we keep watching them.  We keep showing up, studios keep pumping out, and everyone wins, even if the product isn’t really (or usually) all that great.  But some rise above, and I was struck by how Greenland played the same cards as Tomorrow, and so won the same big pot.  Let the events unfold, don’t force them, don’t even make them the primary focus.  Let the journey be the point, the family, the survival, the great heroism in the face of great change; that’s the ticket.  The plot worked well because it was important, not a sideshow to the explosions; it was simply a good story with surprisingly good acting.  Also, there was more being said beneath the surface; first responder respect, immigration prejudice, pandemic control.  And of course, yeah, the end of the world looked awesome too.  Greenland is shockingly good, given the premise and the cast, but we need to make sure we reward it so that filmmakers will use it as an example going forward.