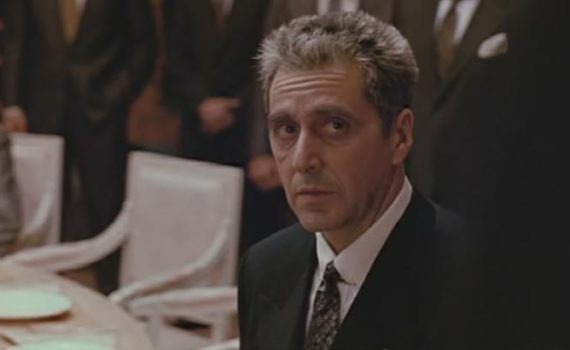 As big, powerful, successful, and special as The Godfather and the The Godfather: Part II were and still are, The Godfather: Part III is equally horrific.  Released sixteen years after the second in the franchise, it was an obvious ploy to capitalize on the fame of the first, and audiences might even have been eager to hear more about the Corleones, no one would blame them.  Shockingly, the film was nominated for seven Oscars, SEVEN, although it didn’t win a single one.  It seems like a kind and appreciative nod from the Academy, for Coppola’s classics that came before, but I think pretending like Part III was anything other than an embarrassing disaster is just unkind.

How the years have flown by, but my how people stay the same.  Back in New York, the Corleone family has sold all its interests in the casinos world and is attempting to become somewhat legitimate, building a Catholic charity run by Michael’s daughter Mary, and keeping out of mafia-related problems.  Michael’s big plan is to finance the Vatican’s European interests, thus making himself the richest man in the world; pretty lofty, but if anyone can do it.  Trouble comes in the form of Joey Zasa, a two-bit drug dealer who wants in on the action and who is being bankrolled by some mysterious power higher up.  Sonny’s illegitimate boy Vinny will protect Michael from this goon, but once the gears of war start spinning, it’s hard to slow them down.

Perhaps they waited too long to make the third, perhaps it never needed to be made, perhaps the stars simply didn’t align; no matter the reason, Part III is a complete, disgraceful failure.  How anyone could think otherwise is a head-scratcher to me; it’s plain awful through and through.  First, it feels like a Silk Stockings episode, complete with Bridget Fonda in a tiny role that feels ridiculous and Andy Garcia dressed in silk robes.  But the biggest problem is Sofia Coppola, who I could write a novel about, describing how her acting killed my soul.  She’s the director’s daughter, she stepped in at the last minute, she can’t act, it’s obvious, unnerving nepotism, and she destroyed any credibility the film might have been able to build.  I can’t put the blame solely on her shoulders though; Pacino was bad, Diane Keaton was as well, no surprise, there was no one to step up and fix things (Sonny, Tom, Fredo), so the entire plot fell apart while being riddled with F-list acting.  To top it all off, the story was mind-numbingly boring and didn’t contain one original idea.  The very last big scene held such raw emotion that it almost saved the day, but maybe all it really did was save the film but being a one-star dud.  I get upset with the Academy sometimes for their choices; this one takes the cake, and should serve as a reminder to not trust anyone’s cinematic taste but your own.