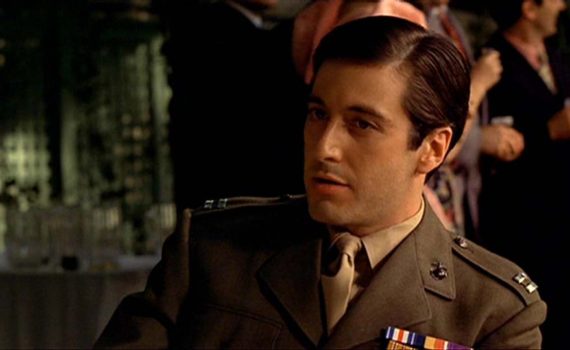 Almost no film in cinematic history is bigger than The Godfather, in either pure success or in scope of story.  Almost 36 years old, it’s a movie that still ranks at the top of most lists, with every other feature scurrying at its feet trying to reach the level it skyrocketed to with such ease.  It’s almost like the Beatles; they may not be your favorite band, but you know a ton of their songs, and you respect them for what they did, knowing that they’ll always be the pinnacle we look up to.  That’s the way it is with The Godfather, there will never be another quite like it, no matter how harm filmmakers try.  It may not be perfect, but it is the definition of ‘iconic’, and it will last for as long as we remember movies.

The Corleone mafia runs New York the way the old regimes used to run Sicily; with a firm grip on its family and a choke hold on the rest of the world.  Don Vito Corleone, the Godfather, is a man you do not cross, or you invariably wind up dead.  You can ask him for favors, he will grant them, nothing is beyond his reach, but he will call upon you one day to return the kindness, and you had better not say no.  Vito’s three sons and one daughter are the apples of his eye, and he will do anything to protect them; Sonny, Fredo, Michael, Connie.  But when a hit is put out on the Godfather himself, when the pieces rise up to defeat the chess master, his children will be the ones to protect him, with Michael, the youngest son, rising to the occasion to take over the family business.

I assume most people have seen The Godfather, but I think the number of people who have caught parts on TV and have never sat down to experience the entire thing might be larger than we think.  Asked to give it a shot now, to really focus for 170 minutes on a movie from the 70s about gangsters, I wonder how many would decline, how many would assume that the story would be too boring; well-made, but boring.  I just have a feeling that this contingent exists, but they have very little to worry about; this film absolutely does not disappoint, it’s #1 for a reason, and on the off chance that you have been skeptical before, I nudge you to give it a shot.  Classic scene after classic scene, too many excellent, Italian characters to count, murder plots, revenge killings, risings to power; I have never read the Mario Puzo book, but I assume this movie does it total justice.  A young Al Pacino is a rising star, Robert Duvall plays Tom Hagen to perfection, and I’ll always love Fredo, he’s a fascinating character, especially as the saga continues.  Don’t shy away from Coppola’s masterwork; its vision will knock your socks off and the bandwagon always has room for one more.