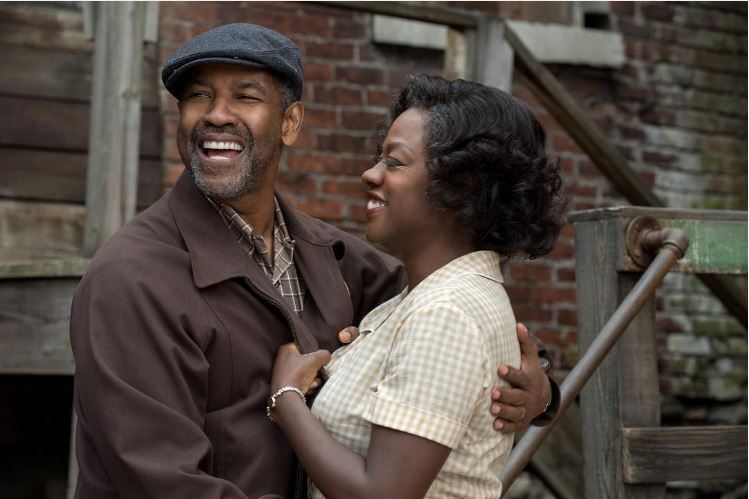 Awards will surely come Fences way, but perhaps not as many as were expected at the beginning of a highly anticipated season.  This film was a front-runner from the very beginning, and deservedly so, with a star duo of such high caliber, a solid base to build a feature on, and a wonderful story to tell.  But if my reaction to the movie is in line with many other critics’, Fences might go the way of La La Land, impressing a great many but not ultimately making as large a splash as was originally anticipated.  Both build off Broadway, but aren’t quite as good as the best you can see on stage, falling just short of wonderful screen adaptations, becoming strong attempts instead.  Strong attempts with a few magical moments, that’s for sure, and I doubt many argue that this movie is weak in any way.  My point is that it isn’t the powerhouse you might expect.

In Pittsburgh in the 1950s, a father struggles to raise his son while also fighting the heavy-hitting world around him.  Troy Maxson is a garbage collector, working every day in the stink to make a living, to provide for his family.  A promising baseball player in his day, Troy has always felt like every good chance has passed him by, that he remained stuck in the mud of the daily grind while others got their shots.  Rose, his loyal wife, has been by his side for years, even though Troy isn’t always the easiest man to love.  Cory, their son, just wants to escape from under this father’s shadow, to play football, to go to college, to leave this dreary world behind.  Set against a backdrop of race relations, mental abuse, and all the hard knocks life can throw your way, this trio will strife to rise above and overcome, something easier said in speeches than done.

Fences is basically a filmed stage play, which isn’t exactly to its discredit, but does speak to the lack of skill Washington brought to the project as a director.  He was unable to move the movie past the theatrical, leaving it where he found it, which was slightly disappointing.  The first half of the film and the monologues that dominated it were mostly enough to push that imperfection into the background, but the second half let too many mistakes become exposed.  Act II was slow and felt a bit forced, failing to pack the punch of Act I.  Viola Davis was the one constant throughout, and, I predict, will be the one sure bet to win awards come Oscar-time.  She was incredible and will be a runaway favorite to win her category, her nomination basically being a given.  I just have a feeling that Fences as a whole will under-perform, and with reason, as it is definitely excellent, but just not quite at dominant as we might have hoped.