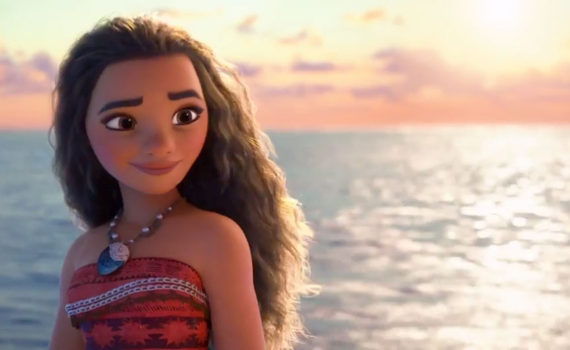 I’m growing tired of explaining what Laika and Ghibli are to your casual movie-goer who thinks that the only high-quality animation being crafted today is by Disney and Pixar.  And while I like those mass-produced masterpiece movies as much as the next audience member or film critic, I also know that there is a step above Finding Dory and Zootopia, artistically speaking anyway, and that other, lesser-known studios are making wonderful pictures every year that more often than not deserve much more credit (and money) than they are receiving.  Take Kubo for example; that’s the animated movie of the year, not Moana, but stop-motion isn’t as popular as princess musicals, and so explanations are in order.  With that mini-tirade aside, I will still say that Moana is both fun & worth your time, another Disney hit, it just isn’t the cream of the crop.

An island people who never sail beyond the reef begin to experience a failing of their crops and fishing grounds, leading the impetuous and adventurous Moana on a journey outside her comfortable existence.  Many years ago, the demigod Maui stole the heart of Te Fiti, leading to the gradual decline of the Earth.  Moana must find Maui, convince him to return the heart, and put the world back in balance.  But Moana doesn’t know how to sail, the knowledge has been lost to her people, and she doesn’t know how she’ll impress the urgency of the situation on the pompously powerful Maui.  Still, it is her destiny to save the island, and not only that, but all the islands, all the world and all its natural connections.

The music for Moana was done is tandum with Lin Manual Miranda, and the songs have a definite Hamilton feel.  Understandable, it’s a huge hit, why fix what isn’t broken, but I did feel slightly disappointed that much of the soundtrack felt like a song I’d already heard, just set to an island beat.  Still, the music was catchy and well-made, so that’s only half a complaint.  The animation was beautiful, no complaints there, and there was the patented humor-blended-with-moral that we’ve come to expect from these films, so all was well on that front.  The Rock was OK, the girl was OK, but the side characters were all solid: Rachel House of Wilderpeople brilliance, Jemaine Clement stealing the show, Alan Tudyk the master of voices.  Moana is nothing short of another Disney hit, I just feel defensive of the others in the genre that get far less recognition and deserve far more.