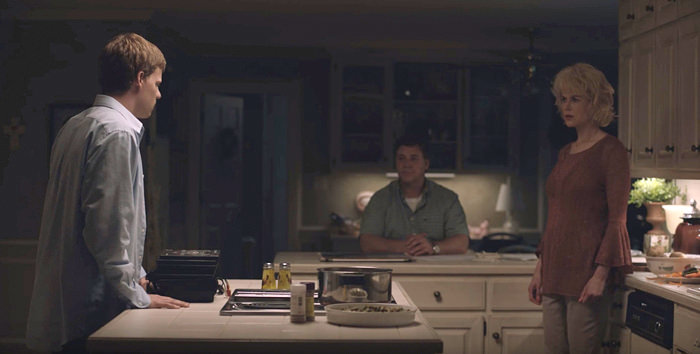 We did Boy Erased a disservice by grouping it with Beautiful Boy and Ben is Back simply because they share some similar letters and young actors.  All three focus on the destruction of family, but those two because of drug addiction; this one because of something much more internal.  Boy Erased should not be compared to these others and subsequently brushed aside; it is a powerful drama all its own that covers a concerning subject with a deft hand and sheds light on a disgusting practice that’s still ongoing today, as hard as that is to believe.  We’ve failed this film by ignoring it so far, by letting it slide under the radar, and that’s something that each of us needs to remedy, because what we have here is not only one of the best of the year but also a story we should no longer pretend isn’t happening every day, all around us, with life-destroying effects.

Jared is a typical Southern teenager; the son of a preacher/car dealership owner, plays video games and basketball, has a nice girlfriend, hangs out with friends at the lake, the normal stuff.  He’s off to college where he will undoubtedly do big things because he’s a bright kid, but an attack at school by a boy he thought of as a friend will derail the course Jared was set upon, and will raise questions he’s nowhere near ready to answer.  Jared is gay, or at least he thinks he might be, and this event at school has brought the truth to the forefront where his parents can see, his conservative, Bible-thumping parents.  Their plan of action; send him to conversion camp.  It’s not called that exactly, there are smoke screens in front to make it look like these people are working the will of God, but make no mistake; Jared will be asked to call his sexuality a sin and his attraction an abomination, as the men in charge, who say all they want to do is help, begin to damage him and the other boys around him in ways that can’t even be imagined. This story angered me so much, made me want to become an advocate, made me want to scream at every politician and church official who ever told a young person that being gay is simply a choice given to them by Satan and that they are choosing every day to live like sinners.  You would think that this couldn’t happen any more, that we’ve progressed past this, but that simply isn’t true; only 14 states in the US have banned conversion therapy of minors.  Other counties and cities have joined in, including my own Columbus, OH, for which I’m immensely proud, but that just isn’t enough; as long as this practice is legal somewhere young people are still at risk.  What’s more, religion is pushing this dangerous narrative, churches are teaching it to kids on Sundays, and young people are growing up thinking that there’s something wrong with them because the people that they trust the most are telling them so, all because of fictional books about fictional deities that are so insane they would be laughable, if they weren’t also so evil.

I tried to critically rate this movie independent of my feelings toward conversion therapy, but that was definitely difficult.  I’m not going to apologize, Edgerton picked the subject matter, he gets my fervent support for doing what he can to expose the criminally dangerous practices of these facilities, and I think the truth behind the story only bolsters the quality of the film.  It’s a heartbreaking tale from start to finish, and I’m glad someone’s telling it.  I’m also glad that this team was the one to pick it up, because everyone involved is tremendously talented, and they were all more than capable of making Boy Erased work.  Edgerton is just getting started as a director (The Gift), but he’s showing us early what he can do, and it’s incredible.  Hedges is on top of the world right now, and this performance works much better than his character in Ben is Back.  Kidman and Crowe have both aged to become more talented, Edgerton is strong as the maniac who runs the camp, there are a few nice cameos (Xavier Dolan, Flea, Joe Alwyn), and I was left amazed by the flow of the action, how the movie never once felt boring or overbearing.  This is a film we should have spent more time talking about and I think would have rated higher had it come out independently at some other time and had it been marketed better.  Regardless, Boy Erased is one of my favorites of the year, both because of its powerful message and its remarkable delivery.