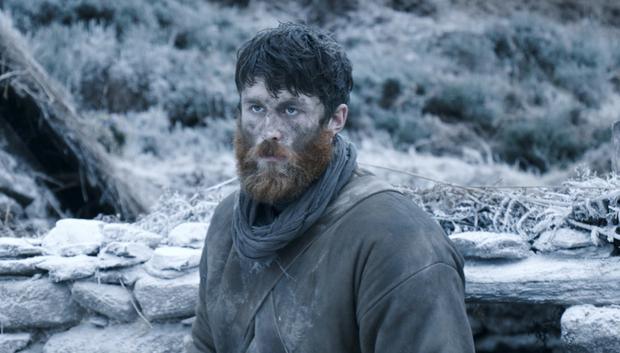 Black ’47 is somewhere in the middle of The Proposition and The Nightingale; a bleak, harsh, shocking look at the human condition under the thumb of an evil empire, where homelands turn to frontiers and violence seems the only answer.  It’s another tale of the brutality of the English upon the Irish, this time not in a foreign land, but in Ireland herself, where occupying forces wage war against the very people they claim to be protecting.  It’s hard to watch, and seems so long ago, but we can’t pretend powerful countries don’t still dominate weaker, that they don’t still treat indigenous people like a problem, a pest.  A Neo-Western with a message, this film has some real, raw strength.

Set amid the Great Potato Famine of Ireland in the 1840s, we see firsthand the death and devastation caused by the failure of a single crop, and subsequently by the greed of English landlords who taxed the poor and dying, evicting them from tenant farms to die in hovels throughout the Irish countryside.  A runaway soldier, having fought for the British but now returning home, sees with his own eyes his own loved one’s graves, the brutal killings of his own family members, and vows to seek revenge on those responsible.  What follows is a killing spree seen by locals as justice, not brutality, and when the English send a specially-trained soldier to deal with the problem, he’ll find no aid in Ireland, for her children are now fighting back.

I might criticize this movie for being a little too simple, or perhaps too idealistic; the beloved son returns to his country, he rises up, others follow, lessons are learned, the future remains uncertain, goodnight.  It’s probably more depressing than that, nothing ever really changes, and it’s not a true story of a time when dramatic action really was taken, so it’s more a highlight of the plight of those we might otherwise forget, not a grand epic tale or a dark slow burn.  It even gets rather action-y, and that’s fine, but maybe cheapens the point just a little.  Regardless, Black ’47 is a surprising hidden gem with a hard task that’s achieved admirably well.  It’s very dark, very unsettling, with wonderful moments of clarity and precision, and some excellent overall acting: Frencheville, Weaving, Fox, Stephen Rae, Barry Keoghan, Jim Broadbent.  It’s a Western style that American audiences will understand, just set in a different historic location, and with a little more depth behind the story.  Violent, victorious, and vivid, this a film to see once, but perhaps not one you’ll ever wish to see again.