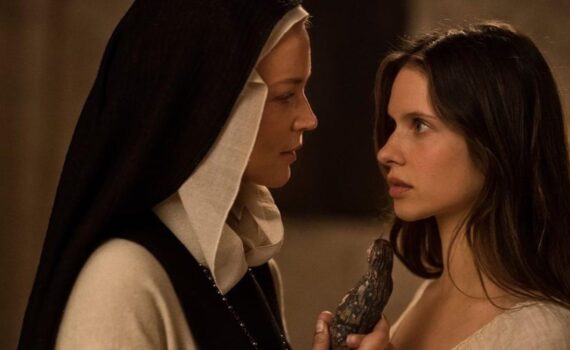 You may not want to watch Benedetta without understanding the mind of director Paul Verhoeven first, as much as we can possibly understand what goes on in that bonkers brain of his.  Specifically, watch Flesh+Blood, one of my personal favorites, and a great example of what Verhoeven likes to do in the face of religion, on the topic of sex, with the tool of disease.  It’s an amazing film, but very upsetting in many ways, so watch with caution; if you like it, check out Benedetta as well.  This is a modern cousin to that classic, exploring some of the same themes, but changing the angle a bit, while still ruffling similar feathers.  Well, that may be putting it too mildly; Benedetta was born to make you blush, cringe, and question everything.

Benedetta comes to the city of Pescia as a small girl, already knowing that her life belongs to God and that she will join the convent there forever.  Her family is wealthy, she is allowed to enter, she devotes herself to her beliefs, but encounters odd visions as she ages into womanhood: sexualized dreams of Jesus, portents of the future, bizarrely violent theatrics.  At the same time, a poor girl enters the nunnery, a beautiful townsperson named Bartolomea, who instantly begins an erotically charged kinship with her our heroine, her new cellmate.  Rising in power because of her visions and possible stigmata, Benedetta also creates many enemies, women who soon wish to use her sexual relationship with Bartolomea against her and for themselves.

Those who know Verhoeven and have seen his films won’t be as shocked as those who come in blind, but I don’t think anyone is truly ready for Benedetta.  It’s erotic, it’s sacrilegious, it’s bizarre, it’s plain heresy, and it’s fun in a lot of uncomfortable ways.  Then there’s simply a love story …maybe? …because we never quite know what’s going on, what the motives are, what the truth is, or where all this is leading.  It’s a wild, often brutal time of intrigue and suspicion, with a lot being said beneath the surface.  If you come out of this film still wanting to be religious, your faith must be unshakable, because the Church is rarely shown as this evil and this stupid, which is exactly how it still is today, and probably will be until we’re all long gone.  But Benedetta makes its points, has its laughs, knocks us back a few steps, and refuses to apologize, which is exactly what I love about Verhoeven and his audacious adventures.