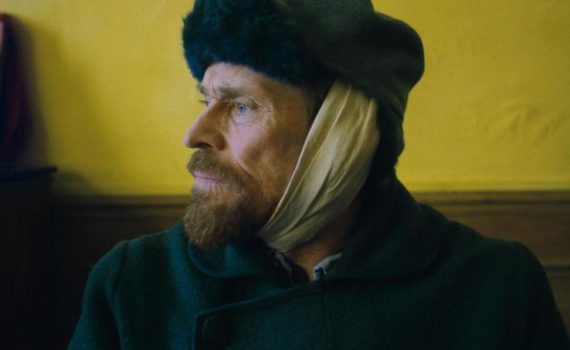 Willem Dafoe’s performance in At Eternity’s Gate was nominated for a Best Actor Oscar, which is saying something, especially for a weird role in a movie no one saw about a mad genius right before he died.  I recently watched Gauguin, another biography of talent cut loose from reality, or at least the extremities to which an artist must go to tap into that raw magic we crave, and Gauguin had a part to play in Van Gogh’s life and in this movie, so there’s that connecting, and the films have some similarities as well.  At Eternity’s Gate is more expressive and less realistic, relying on letters and feelings, trying to help us see what it must have been like to be Van Gogh, when that depth of understanding is impossible.  Well, they tried, and they created something beautiful, but, unfortunately, not a masterpiece.

After many years of no success, Vincent Van Gogh took the style no one wanted to buy down to the south of France, in Arles, where he could commune with nature and perhaps finally create something the world wanted to see.  But his mind was slowly deteriorating and he was becoming more erratic, his behavior landing him in mental asylums and forcing him from the towns he looked to for support.  But the earth was all around him; what more could an artist ask for in the way of pure inspiration?  His friend, Paul Gauguin, came to visit him and attempted to rein in Van Gogh’s frantic painting frenzy, but he was unsuccessful, and would eventually leave, driving Vincent even further into insanity.  Van Gogh knew that he was born to paint, that he must paint or die, but his mind was battling against him the entire time, and would eventually win the war.

Willem Dafoe’s performance was strong, but I don’t think worthy of an Oscar.  I more enjoyed the people he met along the way and who were part of his life; Friend as his brother, Isaac as Gauguin, Mads Mikkelsen as a priest.  The whole film was much more a flowing event rather than a series of plot points, mixed with odd repetition and some readings of letters, until the movie began to feel like a dream, and sometimes a nightmare.  There were strong elements; the paintings, nature, a pervading sadness, a sense of unappreciated genius that was torturous itself.  But there were weak parts too; Dafoe’s line delivery, a vagueness of concept, meandering trains of thought, an overuse of people pretending to be artists or mock-painting works of art.  Part biography and part fever dream, At Eternity’s Gate is a lovely and laudable attempt to explain the unexplainable, but that doesn’t mean it was fun to watch.