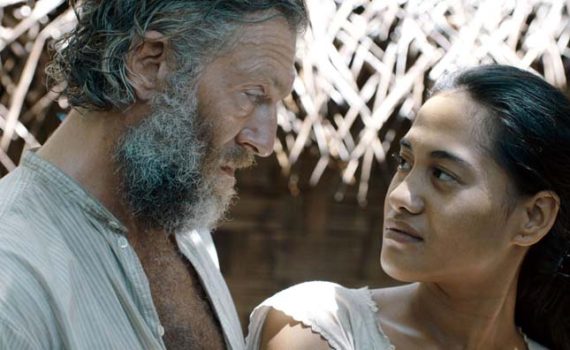 I feel like I found him early, at least for an American, and I’ve watched Vincent Cassel shine ever since.  He’s one of the best professionals working today, be it in France or in Hollywood, and I would hope that, by now, most audiences know his name, or at least know when they see his face that they’re about to see something very special.  The Messenger, Brotherhood of the Wolf, Irreversible, Sheitan, Eastern Promises, Black Swan, A Dangerous Method, Trance, Beauty and the Beast, Partisan, Child 44, Tale of Tales, My King, The Little Prince, It’s Only the End of the World, Jason Bourne; what can this actor not do.  Now he takes on an artist at a very unusual time of his life, and even if the film itself fails to capture our attention, Cassel absolutely never does the same.

Paul Gauguin, one of the most famous French artists in the country’s history was once penniless, unappreciated, and a complete disaster.  His paintings weren’t selling, he and his friends revolted against the trend of religious artwork, and his estranged family suffered without the money he failed to bring in and the mundane jobs he was unwilling to find.  Gauguin was starving, in poor health, disrespected, and had no prospects; even his agent began to lose doubts in his talent as the sales of his works continued to plummet.  Being an anarchist/post-impressionist was neither lucrative nor beseeming, and Gauguin suffered for his inflexibility and his belief that art came from somewhere other than religious zealotry.

Leaving his family and his financial troubles behind, Gauguin fled to French Polynesia to study nature, beauty, and to find inspiration in the daily activity of painting without the restraints of a style, a deadline, an expectation.  There he would fall into even poorer health, having a heart attack and barely eating, instead spending every waking moment drinking and painting, until it consumed him.  He was saved from despair by a Tahitian girl named Tehura, who he married and took back to the village where he made his home.  She inspired him to create great works, and after his death, when fame would finally come, these years amid the jungle would prove to be what crafted his masterpieces.

In this case, and it’s not uncommon, the actor shines brighter than the film itself, which allows audiences to appreciate at least one aspect, but not, perhaps, that which was the original goal.  Cassel is simply brilliant, in whatever role you slide him into, with a darkness and the depth that must be almost impossible to reach, yet he makes it seem so simple and so natural.  His ability to at once stay within his own style and also embody another person is mesmerizing, and not very common.  Not every actor can lose themselves in a role while also keeping a part of their personality present while never breaking down the wall; it takes a true star to master this balance, and Cassel is one of the very brightest.

The film fails to illuminate on its own, however, falling dimly behind its lead until you almost forget that there’s a movie somewhere hiding in the background.  It’s like we’re simply following Gauguin around, which is fine, but that’s not going to leave audiences with any impression other than the same feeling we could get reading a Wikipedia article.  I do think that I learned a little about Gauguin, that’s good, but that’s also not enough.  In addition, Cassel improvised many lines and you can tell, which is a good thing and a bad thing at different times.  But that simply acts as an example to how little the filmmakers did, period, and how little impact this movie will have one day after having watched it.

Video – With an aspect ratio of 2.35:1, and with no other details available, despite the Blu-ray medium, the video quality of the film is both good enough to avoid notice and not quite strong enough to deserve comment.  The sets and landscapes are gorgeous; that’s almost a given, given the locale.  The forests, the waters, the local people, and of course the artwork; there’s beauty here, but maybe not as much as there should have been given the content and the expectations it drums up.

Audio – The Blu-ray was done in French 5.1 DTS-HD Master Audio, with an option of 5.1 Dolby Digital.  Subtitles are automatically in English, but can be turned off.  That’s it for the audio, and while there was a nice backing score throughout, it left my ear immediately and will make about as much impression on me as the rest of the film did.

Extras – There are a few special features if you’re interested in going deeper.  Illustrations is a 15-minute behind-the-scenes look.  Vincent Cassel as Gauguin is a 4-minute interview segment.  Life and Painting of Gauguin is a 5-minute featurette on the inspiration of the movie.  Tahiti is a 2-minute peak at the local culture.  And there is a trailer for the film.

Rent It.  A painting by Gauguin came up on a daily calendar that my family was flipping over, and I was able to tell them what little I knew about the artist, his marriage, the island, a couple aspects about the art, all because I saw this film, so it was in no way a waste of time or energy; I learned something and I got to see Cassel do his job, so it wasn’t a compete bust.  But I was disappointed; the film itself was lost behind one grand performance, and that’s not acceptable.  I won’t remember what I saw for long because the story and its supports didn’t do enough to make me, and that’s a real shame.  The video is at times lovely, the audio fades away into the periphery, and there are a couple bonus features on the disc, so the technical aspects aren’t a complete loss.  Neither is the movie, but just barely, and basically because of the lead, so I’m not sure how much credit I can give to a film that only did the minimum.