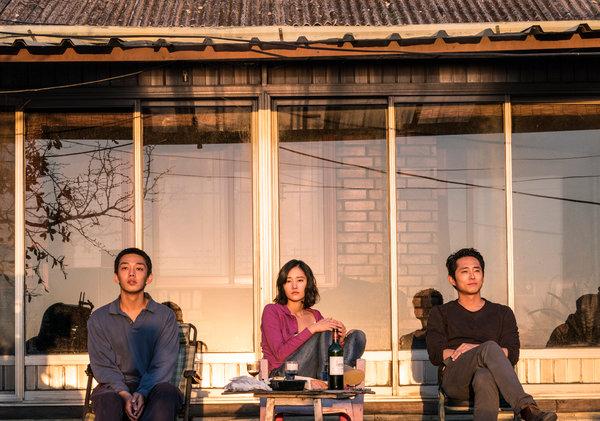 All the pieces were in place for me to enjoy Burning; South Korean cinema, Steven Yeun, interesting characters, beautiful cinematography, a story audiences are asked to work their way through.  But sometimes, inexplicably, a film simply doesn’t grab your attention, and while that’s not always the movie’s fault, it doesn’t really matter; if you’re not invested, you’re not invested, there’s really not much that can be done.  Burning failed to suck me down into the darkness, and so I remained on the surface, watching from a distance and distinctly bored.  It’s not that the parts were weak, it’s that the whole apparently wasn’t the bait I wanted to bite, despite the fact that I would have said that it was before I sat down to watch.

Jong-su has recently graduated from college, wants to be a writer, works meaningless jobs meanwhile, and will soon be returning to the family farm because his dad will soon be heading to jail.  While these life changes are taking place, Jong-su randomly runs into a girl from his old neighborhood, Hae-mi, who is just as lost as he is.  Hae-mi is energetic, adventurous, spontaneous, and Jong-su falls for her quickly, especially after the pair sleep together.  Heading to Africa on a trip, she tasks him with watching her cat, cementing in Jong-su’s mind that they are now an item, but when she returns accompanied by a young man named Ben, it might not be that simple.  Ben is rich, frivolous, introspective, seemingly friendly, but Jong-su is jealous and suspicious, which might drive Hae-mi away, but might also be completely justified.

I might need to give Burning another try some day, because, much like with Drive, I simply didn’t like it, but with the added realization that I might someday if I could look at it from another point of view.  Because there are strong elements here, and I don’t really know why they didn’t affect me.  The scenery was stunning, the characters were fascinating, the burn was slow, the style was cool; I wanted to enjoy this movie so much.  I was surprised when I didn’t, and I think some of the blame falls on me for just being in a non-conducive headspace, and maybe that changes on a rewatch.  Although, I will say, I think the run-time was too long, that not enough happened, that the burn was maybe too slow, and perhaps the main actor wasn’t up to carrying such a heavy load.  But I’d be willing to prove myself wrong some day in the future, willing to listen a little more if that is what is needed, because there’s something here, I just didn’t find it.