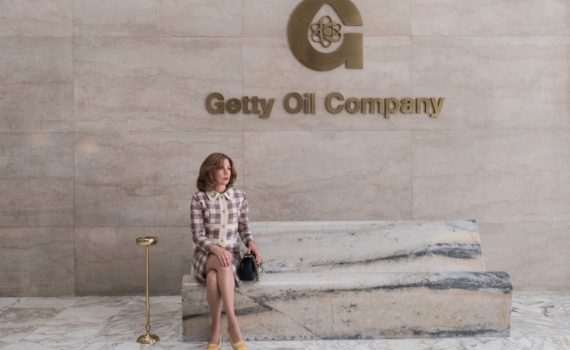 All the Money in the World received most of its publicity for all the wrong reasons.  By now, everyone has heard of Kevin Spacey’s past, the allegations against him, Hollywood’s response, and how basically his career is over.  This film, you most likely know, removed Spacey right before the movie’s release, reshooting necessary scenes with Christopher Plummer and cutting ties with Spacey completely.  In that way, you could say that the film got publicity for the right reasons, for eliminating an abuser from its cast, which was a big step in the right direction, as long as you think Spacey was guilty of the crime.  Not to stir all that up again, I just wanted to mention it, especially because this movie is not good enough for the exposure its scandal brought.  It is mediocre at best, as are the majority of its performances, and we wouldn’t be talking about it if it weren’t for the recast.

At one time, J.P. Getty was the richest man alive, the richest man in history, with an empire that stretched across the globe.  He was an oil man, and prized money above all things, massing a fortune that reached into the billions.  But he was never a family man, keeping his only son at arm’s length, and only noticing his son’s wife and children later in life.  Fast forward a few years and Paul Getty, the grandson, is living in Rome.  While walking the street one night, the 16-year-old boy is kidnapped, held for ransom for 17 millions dollars.  His mother, Gail, is desperate to get him back and asks J.P. for the money, which he declines.  He doesn’t want to spend a nickel of his wealth, but he puts ex-CIA agent Fletcher Chase on the job.  Together, Gail & Fletcher will try to get Paul back home safe, if minus a few body parts.

An early Oscar contender, this film would have gone the way of Downsizing and simply disappeared before the Awards had it not been for the reshoots.  It’s simply not a powerful or fascinating drama, a story about a true event that, really, no one cares about.  We would have let it pass by, and that’s probably what it deserves, as it has nothing else to offer us beyond some star power.  Plummer was a great choice for Getty, much better than Spacey originally was anyway, and he probably deserves his Oscar nod.  Williams was pretty bad; I think she peaked some time ago and just isn’t strong enough to carry a movie like this on her shoulders.  Wahlberg, who I usually defend, was god-awful as Fletcher Chase, private dick, the wheeler dealer man; it was a stupid, stupid character.  The film itself was boring but well-orchestrated; I think that might be all Ridley Scott has to offer any more.  There’s nothing wrong with it, some of the captive scenes were quite good, and Plummer commanded the screen like only he can.  But that’s it, there’s nothing more to report, and there’s no real reason to seek out this movie; it’s fine but never fantastic.