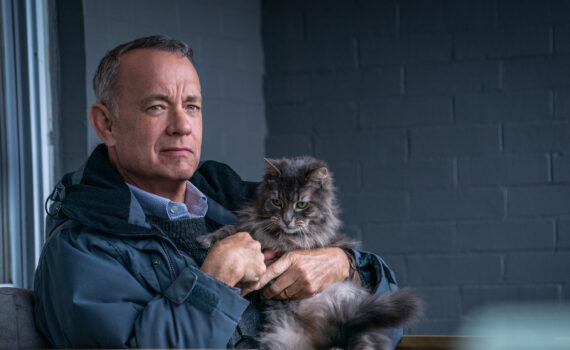 Shouldn’t it be A Man *Named* Otto, since that would be the more appropriate American equivalent of the Swedish title A Man Called Ove?  I guess it doesn’t matter, it’s just a small detail, but small details are where this Hollywood version of a wonderful foreign film goes iffy.  Don’t get me wrong, I quite literally shed a tear watching this film, it moved me very much, and it was ultimately both a heart-warming and heart-breaking watch.  But the Hanks Otto doesn’t hold a candle to the Lassgard Ove, it just isn’t close, and while both movies can be good, only one is spectacular.

Otto might seem like an angry old man to most of the people in his neighborhood, but some know better; they knew Otto years back, when his life had joy in it, and that was a sight to see.  But now, sadly, he’s a man alone with this anger and his compulsions, which makes him hard to be around.  When a new family move in across the street, his plans for a quiet suicide are put on hold and his world is turned upside down, but maybe for the better.  As we learn the story of Otto, we being to understand his behavior, and we start to love the man despite the mood.

First off, track down Ove and give that a watch; it’s on Prime, it’s at your local library, it’s worth your time.  It’s the superior film, because of course it is, and there was no reason to make an American version starring an American legend, it simply wasn’t needed or asked for.  Forster saw an opportunity and took it, no blame there I guess, but he could have done a better job with the film itself, because it feels like it’s missing all the tiny pieces that made the first one special.  Hanks too is a little off his game, just not delivering the character perfectly, it seems like something is off.  However, and it’s a big one, I still think you should run to go see Otto, regardless of its imperfection.  It is cute, and then gut-wrenching, it is nice, and then really poignant, it’s a roller coaster of standard fare and moments of brilliance, but ultimately a wonderful feel-good movie.  And, oh yeah, can’t forget this; I think Mariana Treviño might have delivered the performance of the year as Marisol, and it might not even be close.  Not an artistic masterpiece but a valuable experience all the same, Otto is something you will want to feel.