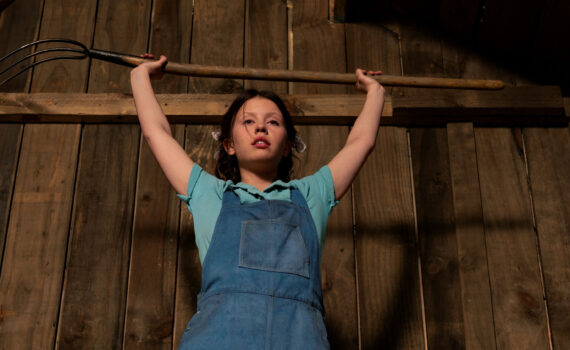 X walked so Pearl could run, or whatever that saying is.  Ti West created a pair of films this year, a tandem of horror, telling two different stories but somehow one story, and I’d say it was a smashing success.  Watching X on its own, it’s simply paying homage to Texas Chainsaw, and reveling in the fun of sex, blood, the 70s, slashers, what have you; it’s a good ol’ time, but not much else.  But then you watch the second piece and you get the joke; X was a throwback to an old style, sure, but it was also a complete setup for what was to come, and Pearl finished the job spectacularly.

In X, we see some young people in Texas in 1979 drive to the country to shoot a porno, and little do they know that they’ll almost all end up dead.  The old farmer couple there are creepier than meets the eye …well, no, they look creepy too, but they are far more deadly than anyone imagined.  But there’s a reason, and Pearl is here to fill us in on all the gory details.  We flash back to WWI and begin to understand the motives behind the madness, and the horror behind the farm, as what happened here in 1918 set the stage for a murderous curse that would hang over the homestead until it was murdered itself.

Pearl is basically a prequel or a backstory, but it’s far more than that as well; it’s the reason X exists, and the true terror of the pair.  The first film is just a tease, it’s the second one that has all the answers, and it’s the second one that had me standing up in applause.  It’s far more than horror homage, it’s a sinister story all its own, and a damn fine film to watch regardless.  Goth is great, every moment is so creepy, the action unfurls slowly, and I was left wanting so much more; maybe going back to 1979 and watching that again would alleviate my anguish, or I just need to wait until Part 3 comes out.  This is a tale that will suck you in, but be warned; it’s not for the faint of heart.