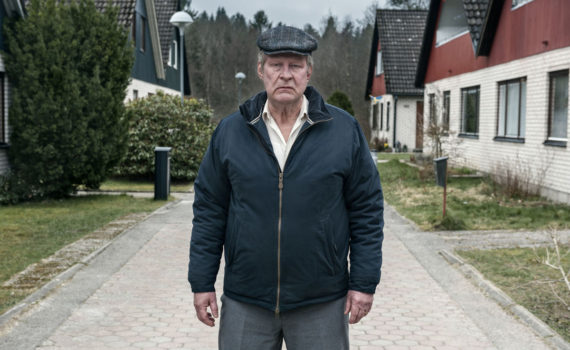 With a website called Archer Avenue, it isn’t hard to guess that my favorite film is The Royal Tenenbaums.  Apart from some genius directing from Wes Anderson and the creation of a fantastic world that is like our own only much better, the film is a wonder of story and characters, a look at family and death from a viewpoint that’s both original and beautiful.  A Man Called Ove is, in a strange way, the Swedish equivalent of Tenenbaums, the revelation of the good inside a bitter old man and the painting of a world around him that may not be perfect, but is full of the love and companionship he’s been searching for his whole life.  No movie is going to reach the heights of my favorite of all time, but Ove at least makes a leaping attempt, and manages to touch rarefied air. Ove is a lonely man living on a quiet block, someone who abides by the rules and expects others to as well.  He has worked at the same rail yard for years, visits his wife’s grave every day, and spends his free time checking garage locks, rattling chains, and screaming at motorists who dare to use the bike-only paths.  Ove is unhappy, and his temper is only going to get worse after he is forced into retirement by the hated whiteshirts of his company, a group of young, snide, pencil-pushers who think they control the world.  At the end of his rope figuratively, Ove decides to make it literal and hang himself, hastening the end and allowing him to be with his beloved wife Sonja once again.  But sometimes even your own death doesn’t go as planned.

Blocked at every turn, and annoyed with life anew by a family of gregarious neighbors, Ove finds himself drawn back into the world he wishes to leave behind by task after task that needs completing before he can come to peace with things and finally let go.  As he begins a reluctant relationship with Persian emigrant Parvaneh and her family, Ove opens up like he never has before, revealing his past and those in it who made him who he is today.  We see the man as a boy, the father who he loved, the woman who he fell for, and the life that he had made for himself, before death met him at every turn.  Now death has come for Ove, or has it?  Has life come in its place, and will living have more promise than he could have imagined? Why this movie works so well could be an entire cinema study course that becomes a requirement of incoming students.  I didn’t go to film school, I admittedly lack knowledge in many areas, but sometimes a movie just feels right, and attempting to figure out why Ove falls into that category could be a fun way to spend a semester.  The grumpy man, the new family next door, the sad past, the lessons learned, even the healing kitty; these elements standing alone seem cheesy beyond description, but somehow they come together to create magic, and how you pull this film out of your hat I don’t think I’ll ever fully comprehend.  What stands out to me though is the movie’s honesty, it’s quirky humor sure, but it’s believability about all, the way it can take standard themes and make it seem like we’re learning about life for the first time.

Rolf Lassgard as Ove was incredible, and Filip Berg as the younger Ove no less so, as the pair of them brought the character to life and gave him impressive depth in a way that not enough Hollywood features even attempt.  The side actors were all solid, the setting of Swedish suburbs was perfect, and then the flashbacks just brought everything to life.  I’m not always a fan of flashbacks, but here they were basically molded into a second film that overlapped the first, allowing audiences to go back and forth, enjoying each separately.  The way they melted together was where the magic happened, creating a multi-layered story that was both sorrowful and hopeful.  Like Tenenbaums in its presentation of a flawed hero and the toll that simply living has taken on him, Ove is a film that gets it, whatever “it” is, and furthermore knows how to share it with us without our even seeing clearly what we receive.  It’s feeling rather than material, and this movie strikes the right chords at the right times, becoming something great. Video – With an aspect ratio of 2.35:1, the video quality of the film is quite strong, allowing every beautiful scene to come to life to its fullest extent.  The cinematography isn’t mind-blowing, but the picture quality is high enough and the movie is shot well enough that the visuals can be enjoyed, without their becoming a focal point.

Audio – The DVD was done in 5.1 Swedish Dolby Digital, with an option of 2.0 Swedish Dolby Digital.  Subtitles can be selected in either English or Swedish.  There is some solid background music to set the scene, but otherwise the audio takes a page out of the video’s book and gets out of the way so that the story can tell itself, unhindered by our attention veering to technical aspects.

Extras – There are a few special features on the disc, if you want to see even more.  The Ove In Us All is a 15-minute featurette including talks with Hannes Holm, Rolf Lassgard, and Bahar Pars.  Director and Cast Q&A at Scandinavian House NYC is a 21-minute question and answer panel with the team behind the film.  There are two galleries to choose from: makeup and time lapse.  And lastly, there is a theatrical trailer for the film. DVD Talk Collector Series.  Judging by my list, A Man Called Ove will battle The Handmaiden for the title of Best Foreign Film of 2016, and should even be considered for Best Picture, although I know that’s not how it works.  In my book though, Ove is one of the few amazing films of the year, something special that I did not see coming, something typical and original at the same time, something I’m glad I watched.  This Swedish gem can be enjoyed by so many audiences, it doesn’t necessitate someone who loves art house or who can sit through hours of subtitled dramatics.  It’s rather simpler than that; this is a good movie.  It has heart and heartbreak, but so does life, and I’ve rarely seen honest emotion brought to life like this.  The video and the audio fall to the background, there are a few extras to enjoy, but the technical parts of this film won’t impress.  What will is a the story, the feeling behind it, some clever filmmaking, and that special little something that’s as undefinable as it is hard to capture, reproduce, to bring into our lives; be thankful that Ove somehow managed the near-impossible.