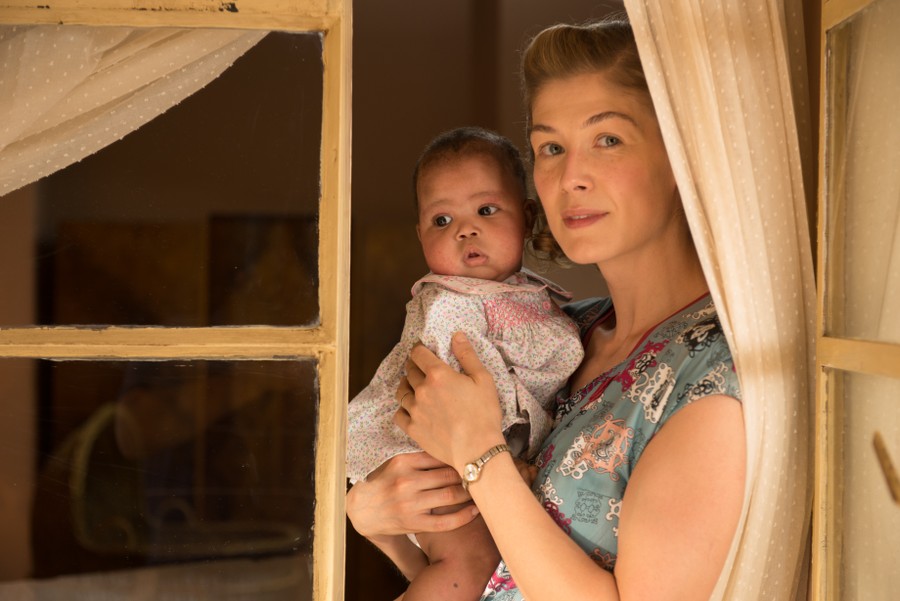 A true story about Botswana in the 1940s isn’t the type of tale to grab the attention of American audiences with ease.  The second element of real life drama here helps a bit; the marriage of a black king to a white commoner, the crossing of racial lines that was more than taboo at that time and is still a topic of conversation to this day.  The cast also aids in the sale of this film, Oyelowo and Pike being two premiere talents who may not yet be household names, but who both deserve and demand critical respect for their accomplishments.  Unfortunately, anything the director could add to this story wasn’t enough to overcome some initial disinterest, and couldn’t force the film to be anything other than slightly boring. Bechuanaland in the early 1900s was a place of great turmoil, and the King turned to Great Britain for aid.  To keep South Africa from annexing the country, it became a protectorate of England, its people’s freedom both protected and diminished.  Generations later, the same royal line marched on in succession, but each King had to bow to the will of a Queen overseas, as Bechuanaland’s inhabitants grew poorer and South Africa grew more powerful.  With the rise of apartheid in the area, tension mounted and segregation increased, fueled by Europe’s racism and the inability of the native leaders to completely rule themselves.  Seretse Khama, the next King, was sent to London for an education, and saw for himself there the injustices that seemed so daunting.

But life goes on, sometimes pitting individual desires against greater causes.  Seretse fell in love with a British woman named Ruth, a salesman’s daughter who had no designs on becoming royalty of what amounted to an English colony.  This man and this woman fell in love and wanted to get married, a right that was not denied by law, but was seen as a betrayal to both their race and their country.  Bringing home a white wife to his native village, Seretse was challenged by both his own uncle and the British government, as his marriage threatened the delicate balance of power in the region, and angered the very powerful South African state.  Love doesn’t always conquer all, it sometimes shatters under pressure, and few couples in history have ever felt such weight. The base story behind this film is a fascinating one, a true tale of love in the face of a seemingly unbeatable challenge.  Banished from his own country for the sin of marrying the woman he loved, Seretse fought on against all odds, as Ruth was forced to grow accustomed to a new home without her new husband.  Talk to a historian if you want to know how many small details were true to life, how many were forged for this film, but the love story shouts its message loud and clear, ringing with a truth that’s beautiful to watch.  I had no problem with the plot, or with the passion behind it, the movie carrying an important topic back into the annals of history while also making this fight seen extremely relevant to our own time.

My major gripe with this film is that it’s simply a little boring.  The drama is set up well, it all flows nicely for a small period of time, but then everything slows down, and for the majority of the movie nothing interesting happens.  It’s a bit of a runaround, the same events occurring over and over, and perhaps that’s how it really happened, but on screen it just doesn’t work.  Once you get past the fact that literally nothing exciting happens except a childbirth, you can see some talent on display, but it’s almost too late by then.  Oyelowo is as strong as always, Pike feels a little less like a fit for her character, but their chemistry is really nice.  Davenport was a good villain, Tom Felton steps away from Draco Malfoy, but Laura Carmichael ought to be banned from the cinema; I couldn’t stand her as Lady Edith Crawley and she’s no good here either.  My overall takeaway is right near the middle of appreciating the true story and the acting, but feeling frustrated that the film failed to add any spice to what was ultimately an upsettingly bland offering.

Video – With an aspect ratio of 2.39:1 (Widescreen), the video quality of the Blu-ray is probably the highlight of the film.  The African scenery is beautiful, and a ton of attention was paid to the cinematography of the movie, not just to a few lovely sunsets.  The colors were rich, the shots clear, and the visuals of this disc will impress those looking for some artistic details.

Audio – The Blu-ray was done in English DTS-HD Master Audio 7.1, with an option of English Descriptive Audio 5.1.  Subtitles are available in English SDH, Spanish, or French.  The audio quality of the film is quite nice as well, with attention paid to dialogue, scenery, and soundtrack.  The music is very pleasant, if not something you’ll look up the next day on Spotify.

Extras – There are quite a few special features on the disc if you’re thirsty for more.  A search bar is available on the main menu, where you can peruse scenes and bookmarks.  Making Of is a 6-minute behind-the-scenes segment.  Filming in Botswana is a 6-minute on-location piece.  The Legacy of Seretse and Ruth is a 4-minute look at their story.  London Film Festival Opening Night Gala Premiere is a 6-minute walk down and interview segment on the red carpet.  Lastly, six trailers are presented: A United Kingdom, Hidden Figures, Jackie, Rules Don’t Apply, This Beautiful Fantastic, Table 19. Rent It.  With better pieces than a final puzzle, A United Kingdom is a movie with a wonderful motive that just didn’t come together correctly.  The actors are solid, the direction is artistic, the foundational story is there.  The result just isn’t captivating in the way you might imagine it should be.  The true story element is fascinating, but there isn’t any passion infused into the plot, at least not enough to keep audiences from yawning.  If the film had been any longer, I might have fallen asleep, and that’s not a note on my lack of attention, it’s a criticism of the filmmakers’ inability to successfully draw me in.  The video is actually quite wonderful, the audio nice, and the extras plentiful.  Just don’t expect an Oscar-winning feature film; it won’t hold up to that much scrutiny.