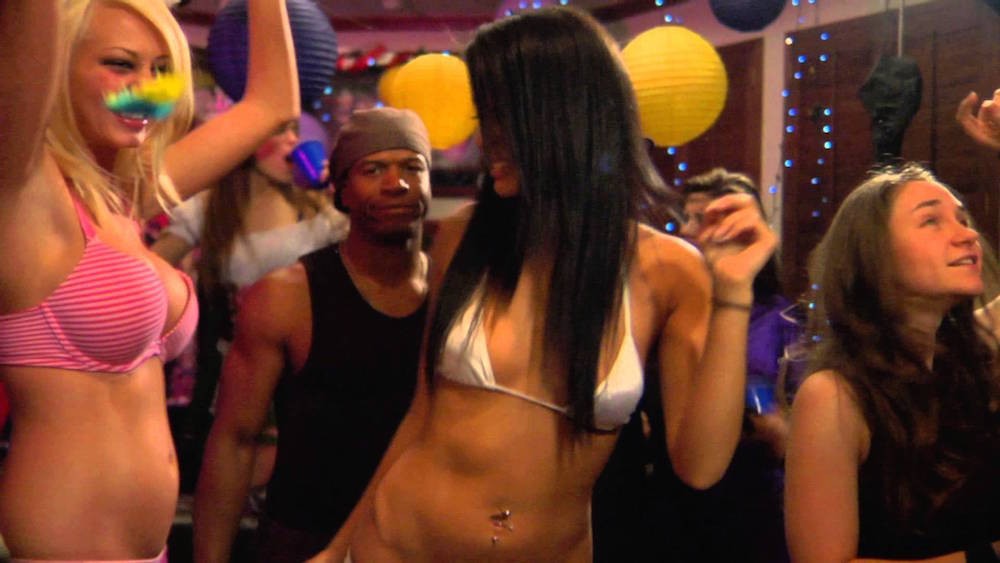 Your guess is as good as mine as to why American Pie worked when so many other coming-of-age sex comedies die a terrible death as soon as they hit the screen, some as soon as they hit the straight-to-DVD shelves.  Maybe it was Eugene Levy, maybe it was the pie, who knows, but that film is now a classic, and in comparison, The High Schoolers Guide to College Parties will never be.  Not only will it never become a classic, it will never be seen by more than the 200 people globally who invested their time in watching this complete waste of space and regretted every minute of it.  Add this film to the long list of those who tried and failed. Shaq is a high school loser, and his only hope for redemption lies in becoming at least a passable collegiate when the time comes.  First, his name gets him picked on, since he’s so very tiny and obviously not related to O’Neil.  Second, he dresses like an intern for some strange startup company.  And third, he just kissed his best friend Chelsea, which was both a terrible idea and probably the only action he’s ever had.  He needs a sign that life might improve, and getting a college scholarship when all his friends are off to community college might just be the ray of light that keeps him going.  Problem is, he’ll need to throw a party first.

The frat boy type group that holds Shaq’s fate in their hands wants him to have a keg bash to show that he has what it takes to be a big man on campus.  He doesn’t, of course, but this might be his only chance to escape the shitty fate that’s already laid out in front of him.  So Shaq and his friend Sideshow start a list of what they will need to impress the partygoers; beer, a band, hot girls, costumes, a hip house, and enough people to make the pair of them look cool.  Meanwhile, Shaq has to navigate the crush headed his way from his best friend, whose heart he’s breaking by not returning her affection, and he has to make a fake ID translate into liquid courage.  Good luck, bud, you’re going to need it. I guess it’s partly my job to break down why some movies work and why some don’t, and with every review I try to get closer and closer to that level of understanding, something that I’m sure will never actually come.  But sometimes it’s hard to make sense out of why some ingredients blend in just the right way, while other, almost identical recipes go up in flames.  American Pie, Superbad, Clerks; these are the movies that High Schoolers Guide is trying to be, but these are the movies that had the right magical combinations to work; this film couldn’t work magic if it was directed by David Copperfield himself.  It may not always be easy to pinpoint why a movie succeeds, but it sure is obvious sometimes when it absolutely doesn’t.

I have a screenplay idea in the back of my mind, I’ve tried to transpose it onto paper, but now I feel like I’m one step closer to completing it, because now I know exactly what I don’t want it to resemble.  A low-budget, coming-of-age comedy has a certain vibe, but this movie is disastrous in every way, it’s precisely the direction I wouldn’t want to take any film I was tagging my name onto.  It’s stupid beyond belief, crass when it has no need to be, juvenile at every turn with no breaks, and presents absolutely no talent to the screen that any of us could possibly take seriously.  More an idea gone bad than actual cinema, consider this a lesson in the dangers of thinking that anyone can make a movie and then acting on that.

Video – With no aspect ratio to speak of and no video details other than “color”, this is a picture quality best forgotten immediately.  The film looks as bad as it feels to watch it, and so I have to recommend that you don’t.

Audio – The DVD comes with two audio choices, 5.1 Surround or 2.0 Stereo.  The film is done in English, but there is an option of English SDH.  That’s it as far as the sound, except to note that the music is horrendous and the voices don’t match the characters’ lip movements. Skip It.  Some b-movies are fun, some sex romps are entertaining, some high school dramas turn into something that we actually connect with.  None of that is true about High Schoolers Guide, so you’re better served pretending that you’ve never heard of it.  This is one of the worst movies I have ever seen, a complete failure to tell a story that anyone would want to hear.  It feels like a skit, but a skit that you made up when you were drunk with your dumbass buddies.  The video is terrible, the audio just as bad, and there are no extras on the disc, so look elsewhere for any redeeming qualities.  Just don’t bother with this movie; it isn’t worth the loss in brain cells.