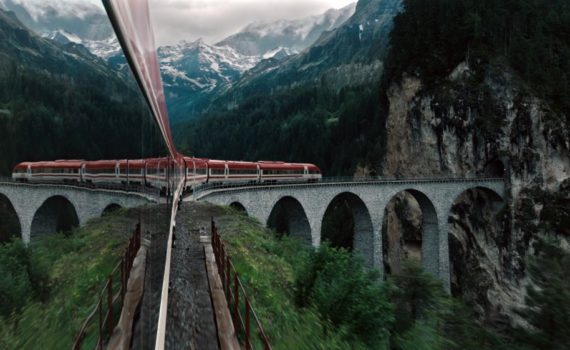 For a film from the director who brought us The Weather Man and Rango, his newest feature, A Cure for Wellness, is both satisfyingly sinister and comfortably classic.  To be fair, Verbinski also directed The Ring, one of the scariest films I have ever seen, and The Curse of the Black Pearl, an absolute and near-perfect gem, so perhaps he is simply the most versatile filmmaker in the industry and we ought to stop imagining that we can predict what he might do next or how well it might turn out.  This film is a pleasant (or unpleasant) surprise, depending on how you look at it, delivering an old-school feel while presenting us with something uniquely spooky.  Hats off to Verbinski for crafting something so strange and yet so familiar, a movie that will scare, of course, but one that is also dangerously delightful. Young, up-and-coming executive Lockhart is in a bit of a pickle. His nefarious and not-so-clever methods have been noticed by the board of his company right before their big merger, something that ought to land him in jail, do not pass go. But there are bigger fish to fry, and Lockhart has no choice but to be the angler. A board member, Pembroke, has gone away to a spa in the Alps and has yet to come back, something that needs to happen if the merger is to be carried out. Lockhart’s job is to travel into the mountains, convince Pembroke to return, and all shall be forgiven. But, as they say with a smile at the sanitarium, why would anyone want to leave? After all, the upper-echelon clientele are very sick, Dr. Volmer seems to be making them well again with his treatments, even if Lockhart begins to suspect that evil might be lurking deep inside the healing waters of the idyllic Alpine retreat.

Lockhart meets the staff and the guests of the sanitarium, and is at a loss for what to do next.  The staff all smile as they lead you to your next treatment, they are all young and attractive, but their goodwill comes with a definite creepiness that says they’re not telling you all they know.  The guests seem to love their home away from home, not wanting the subject of leaving to even be brought up, but some of them are getting sicker, not better, without even seeming to recognize their danger.  And when Lockhart meets the captivating Hannah, who has been at the spa as long as she can remember and who is labelled as a special case, he knows that something must be done to convince the outside world that Volmer and his crew are up to no good, some unknown wickedness that only our hero can expose, but only if he resists the treatment long enough to make it past the gates.

With a horror throwback feel that almost reminded me of Wes Craven’s Swamp Thing, Verbinski’s A Cure For Wellness breathes classic creep while shouting modern imagery.  It’s extremely difficult for a film to walk the fine line between paying homage to the classics while also bringing something new to the theatre, but this movie was able to keep that precarious balance.  There was an odd comfort in the atmosphere of the plot, even while audiences were forced to look away from what they did not want to see, a pleasant mood like spending time with an old friend, all while demanding that the hero not open that door.  Verbinski created a fledgling world in which to set his story, pulled an evil plot out of thin air, but somehow also made us feel like we’d seen this all before, in a good way though, as if we too were enjoying the sinister setting too much to leave.

There’s an extremely unnerving tune played at the beginning of the film, and then brought back throughout, that sets the tone for the whole show, that sets you on edge and makes you wonder what you got yourself into.  This music, some stellar cinematography, and a patience to let events unfold as they will without forcing them to life are all to Verbinski’s credit, helping to elevate the movie above simple genre horror.  There was an insanity to the characters, an unexplained madness, that made the whole thing wonderfully unpredictable as well.  Jason Isaacs was the devil of this particular hell, and I couldn’t help relating his character from The OA, another megalomaniac with a secret.  And Dane DeHaan was great, a bit everyman, a bit cocky, a nice combination of both that made him relatable.  A Cure for Wellness is a strange, drawn out, psychotic, disgusting adventure tale, not a film for the meek, but something that will please your darker side if you so desire. Extras –  There are a ton of special features on the Blu-ray, enough to delight those looking for more from this insane world.  A deleted sequence called “It’s Wonderful Here” is available to watch, it’s 5 minutes long, and it delivers more information about Lockhart’s stay at the spa, including many iconic images from the film that don’t actually appear in the theatrical version.  There are three, 3-minute meditation segments, where audiences can relax to the oddity that is this universe: Water is the Cure, Air is the Cure, Earth is the Cure.  The Score is a 4-minute look at creating the music.  And there are six trailers in all: theatrical, red band, international, The Belko Experiment, Morgan, Shut In. Highly Recommended.  There are many words that could be used to describe A Cure for Wellness: throwback, pulp, gonzo (whatever that means, exactly).  But the one that keeps coming to mind is ‘sinister’; this film is about as sinister as you can get.  It isn’t the most frightening, it isn’t the cleverest plot, it isn’t exactly a b-movie.  It’s a sinister tale told almost flippantly, as if the details really don’t matter.  You’ll find yourself giving up eventually, when you realize that the point isn’t to explain every creepy plot twist, it’s to frighten you with just how bizarre the world can be, at least this wacky one in which people have lost their damn minds.  Then there’s the music, which connects the film from start to finish over the course of two and a half hours, and the cinematography, which can only be described as beautiful.  The video quality is amazing, the audio superb, and there are enough extras to delight fans, so the technical aspects of the film hold up beside what is also a strong, stand-alone feature.  Watch this movie more than once; I have, and it’s worth it.