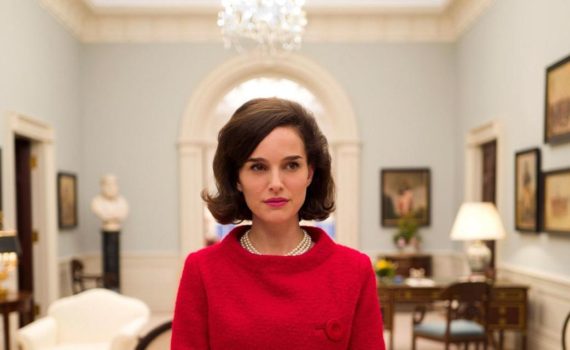 Natalie Portman will most assuredly be nominated for her third Oscar this year for her performance as Jacqueline Kennedy in the biopic event of the season, Jackie.  Portman was nominated for Best Supporting Actress in 2005 for her role in Closer, and she won the award for Best Actress in 2011 for her role in Black Swan, one of the best films of the last twenty years, in this film critic’s humble opinion.  Is she on her way to another Oscar?  Perhaps, and if so, she’ll do it almost completely on her own, lacking the supporting cast, the famous director, the score of the century, and the dramatic thrills of a film in Black Swan that was as close to a perfect package as one can hope to stumble across.  No, Jackie is Portman’s moment to shine and to take the lion’s share of the credit, which she did, will do, and for which, hopefully, she receives every ounce of due recognition come February.

In the days after John F. Kennedy’s death, his wife Jackie began a downward spiral of depression and paranoia, held at bay only by the determination to make sure that Jack wasn’t forgotten like so many other short-term presidents before him.  His assassination is one of the United States’ most famous tragedies, the young man on his way to unprecedented progress in the areas of civil rights and the advancement of American equality.  But instead of changing the world, Kennedy was shot in the head, his wife holding his bleeding body together as their motorcade raced away from the scene. Jackie would fight for a parade, a spectacle, something, anything to help her husband’s memory and good intentions live on past his death, a struggle that would take its toll on her, even as she attempted to continue the charade that the White House was a modern Camelot, that dreams could come true, as her own were utterly destroyed. Natalie Portman will win Best Actress for this role, although her competition will be steep.  Amy Adams, Emma Stone, Viola Davis, even Rebecca Hall; I think all these talented actresses deserve and stand a good chance to be nominated, but if I was predicting the outcome I would give the edge to Portman, who can’t possibly have done more with this character, who gave us everything she had in bringing this story to life.  From the iconic clothes to the accent, from the historic moments to the grace with which she held herself; Natalie is Jackie, and never has this era been captured better, like a photograph that begins to move with some magic all its own.  Add in two excellent supporting men in Sarsgaard and Crudup, and you’ve got yourself a film.  Even though their parts were small, they supported Portman exactly as was needed, allowing her to shine in a phenomenal way.

It’s hard to read the minds of the committee as to whether the film itself will make the cut when nominations for Best Feature are announced, but I believe that it is definitely deserving, one of the best of 2016, if perhaps ultimately falling just outside the Top Ten, of course depending on how strong the late-season, heavy-hitters (Nocturnal Animals, Fences, Silence) actually are.  But Jackie cannot be dismissed, and although standard audiences may find it a bit off-putting, critics understand that what was done here was something wholly unique.  In a way, this is a horror film, complete with jarring music that will set your teeth on edge.  The director takes this true story, casts it in the light of a psychological thriller, and focuses the attention on the one women who was affected the most, giving us insight into the very real possibility that she might lose her mind.  This isn’t your father’s biopic, it’s a reinvention of that tired genre, an uncomfortable, bloody, yet entirely realistic take on one of the biggest pseudo-Shakespearean tragedies in our country’s history.  Watch with an eye for detail, an ear for the incredible soundtrack, and special appreciation for what Portman does with the most difficult role of her career.