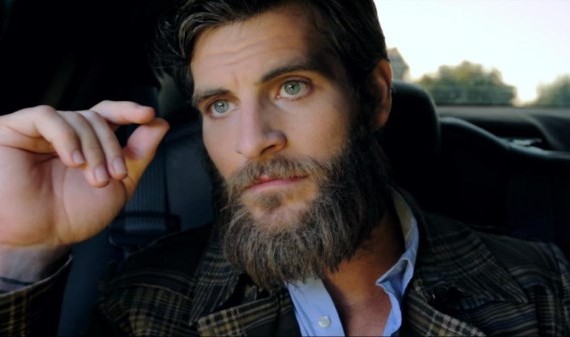 Coming in I expected a whole lot worse from a movie about a Christian rockabilly singer who can’t decide whether the good or the evil path is more fun.  After all, and with full disclosure so you know where I stand, I’m no Christian.  I’d go so far as to say I’m not merely non-religious but anti-religious, someone who believes that all religions affect the world negatively.  Though, like the Devil himself, I know my Bible front & back, having been raised in evangelical churches until I was a teenager.  That’s when my wicked ways started and I never looked back.  Anyway, let that help you decide whether or not you’d agree with me on the religious aspects of this film.  But putting belief aside, I’ll say it again; this film could’ve & should’ve been much worse than it was.

This is a story in two parts.  In the first chapter, we meet Jed King.  He is the son of a country rock legend named David King.  David was no saint, singing about the gospel while sleeping with another man’s wife, becoming a part of messy breakups, bad decisions, and ultimately a son who he loved dearly.  David died young, leaving Jed with a legacy to live down.  He’ll always be David King’s son, the spawn of a man who let a lot of people down, a boy in the shadow of his father, a musician who just isn’t quite as good.  Part of that is because Jed has nothing to sing about, no passion, that is until he meets Rose Jordan.  It’s love at first sight for Jed, and he sets about winning Rose over, taking things slow the way a good Christian boy should, building her a chapel in which to ask for her hand in marriage, beginning a relationship built on faith & love, built to last.

Which brings us to part two.  Fast forward a few years and Jed, with Rose as his muse, has become a star.  His music is finally passionate, his love for his wife & for his God fuels his artistry, and the world is hearing the message of Jed King.  And now enter the Devil, in the guise of a beautiful musician named Shelby Bale.  She shows Jed everything he could have that he’s been denying himself; women, drugs, money, freedom, fame, and of course Shelby herself.  Jed must decide which path his life will go down: the path of the righteous or the path of the wicked.  And his decisions affect the wife & child he leaves at home every time he goes out on tour, spreading the good word while being tempted by a bad crowd.  For a man who once prayed to God for wisdom, life has become a complicated affair, full of pitfalls, but also with hope for redemption. First let’s touch on the religious element.  This film is based on the Song of Solomon, a book of the Bible filled with romantic verse and the celebration of love, marriage, and sex.  Pretty racy for the Bible, as Songs takes a step away from God and his laws, focusing instead on the joy of marriage and the beauty of humanity.  I always applaud films that use the Bible as a background for their plots.  After all, the Bible is full of wonderful stories, basic struggles, classic good vs evil concepts, and some of the greatest fairy tales ever written.  Whether you think the Bible is fact or fiction, many scholars agree that the majority of the stories within are morality tales, guidelines for how humans should live, warnings for what can go wrong.  So here is a movie based on a unique section of the Bible, dealing with something Christians often shy away from talking about, and for that I give it credit.

Now, is it a good movie, that’s the ultimate question, and the answer is “sure”.  It’s much better than it appears on the surface, even better than the first 30 minutes would suggest.  It begins with an overly sappy feel, with a lot of voice-over Bible quotes, and a promise to be a Hallmark original with an overtly Christian viewpoint.  But the film gets better as it becomes darker, adding in more troublesome elements and less security.  Faith takes a bit of a backseat, human error steps up, and the story produces Jed as a main character who is highly flawed.  But I can’t go so far as to call this a great film.  It has so many elements that are available in other movies that are much better.  You want songs?  Watch Rudderless instead.  You want musical heartbreak?  Check out The Broken Circle Breakdown.  You want family cheese?  Try Banner 4th of July.  These movies are all much or slightly better, and when added together create the same feel as The Song.  If you have time to kill watch those three, if you’re on a crunch you could do worse than to watch this one. Video – With an aspect ratio of 2.39:1 Anamorphic Widescreen, the video was quite excellent.  The film was shot using a Red Epic camera, and a lot of focus was put on creating high picture quality.  The color balance was very nice, the visuals were clear, and the film had a clarity that was very appealing.  Hopefully the stills in this review do justice to the quality of the film, because a lot of effort was put into the video and it showed.

Extras – Many extras can be found of the disc.  The film can be watched with commentary from writer/director Richard Ramsey.  Meet the Cast is a nine-minute segment with scenes from the film with actor interviews.  King Solomon on Screen is a four-minute extra on the Bible meeting the film.  Author Kyle Idleman on Love, Sex, & Marriage is an eleven-minute discussion of faith as it affects God’s gift of sexuality.  Metaphors & Poetry is a five-minute experience of many of the themes of the movie.  Bryan and Amy: Hope Restored is a real couple talking about their experience at the National Institute of Marriage.  Awaken Love: A Journey For Couples is an advertisement for a couples study.  And lastly, there are four trailers: The Remaining, When the Game Stands Tall, Annie, Moms’ Night Out.

Rent It.  At least The Song had a clear message and wasn’t afraid to deliver it.  It’s based on the Christian faith and the Bible, but doesn’t back itself into a corner that it can’t escape.  The beginning is more religious than the end, the film becoming more about people and less about God.  At least that’s how I saw it as someone who is anti-religious, understanding the message while not being turned off by a bludgeoning of faith.  I can’t say that it’s an amazing film, but it was definitely better than I expected and created with a passion that was evident.  The video was great, as was the audio, and there are so many extras on the DVD.  Rent this film with confidence if this review has piqued your interest; I doubt you’ll be let down.