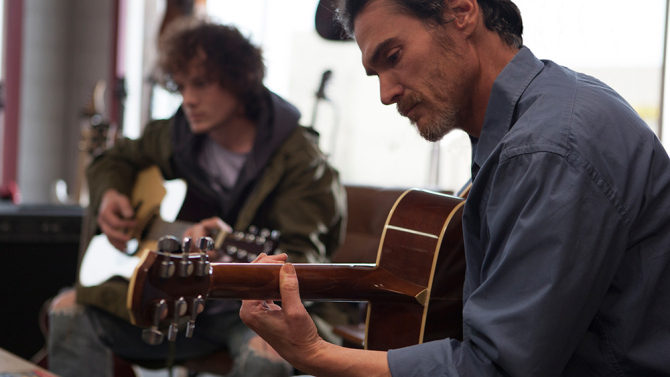 Before his more recent rise to stardom, I remember Anton Yelchin from two films, neither of which were very good.  The first is Hearts in Atlantis, probably the best Stephen King book written other than The Stand, but not a very good movie version.  The other is Fierce People, a good try at an odd story, but ultimately a failure.  But Yelchin stood out to me in both as an up-and-coming talent, a natural actor with a unique look, sound, and style.  With roles in Star Trek, Terminator Salvation, and Like Crazy, he’s cemented himself on the scene and is now doing five or six movies a year.  Not bad for a funny-looking Russian Jew whose parents were figure skaters. This is a story of great loss and the difficulties of recovery.  Sam, a busy advertising executive, has little time for his family, though it seems they once were close.  He and his wife are now divorced, and their son Josh is a student at a local college.  Sam has an expensive car, an ultra-modern house, a hot secretary, but can’t quite connect with Josh, despite the love of music they once shared.  And after tragedy strikes, it proves to be too late to fix things.  Josh is killed in a school shooting, throwing his father’s outlook on life into chaos.  Sam sells everything, moves into a boat on a lake, takes a job as a house painter, rides a bike to work, and tries to forget that he ever lived in another world.

But you can’t escape your past, as much as you might try to run.  Sam is given a box of CDs that were Josh’s and playing them reveals that not only did Josh have an interest in guitar but that he was also a singer/songwriter, a very talented young man pouring his heart into music that no one ever heard.  In an attempt to channel his grief, Sam begins playing Josh’s songs, to only himself at first, and then at a local bar that hosts an open mike night.  He never dreams that anything will come from his playing or that anyone is actually listening, but one very special person takes notice.  Quentin is a guitar player too, a young man with a troubled past who reminds Sam a lot of Josh.  Quentin recognized the talent behind the music, thinking that Sam wrote the songs, and wants to put together a band.  That would be much more of himself than Sam wanted to put on display, but the power of his son’s music is just too compelling, and the new friends begin a journey that can’t possibly have a perfectly happy ending. Anton Yelchin delivers another great performance here as Quentin, the awkward twenty-something who longs for a father figure.  He’s just a super talented kid, that’s all there is to it, and he can do anything.  Billy Crudup is no slouch himself, and he’s actually the main character of this film.  I haven’t seen him do this well since Big Fish and Almost Famous in the early 2000s, buying into the role 100% and giving everything he’s got.  But you know who else was in this movie?  Selena Gomez, and she was terrible.  She played Josh’s girlfriend and was overly weepy in every scene she appeared in.  Felicity Huffman was equally terrible as Sam’s ex-wife Emily, so it was a balance of good acting against bad, a fight for who would come out on top.  Thankfully, Yelchin & Crudup were the focal points, carried the film, and made it solid.

Although, many of the best scenes were just the guys playing music, not speaking to each other.  It was the music that was the actual highlight of the film, great guitar with a rock/folk/indie/alternative vibe that was always catchy and pretty well written.  The songs drove the action, with the actors filling in the gaps, making a semi-musical that knew where its own strength lay and stuck to it.  Credit William H. Macy for co-writing, directing, and playing a bit part in this strong film.  It was his first attempt as a director, and I’d say it went pretty well.  There were times that is was obvious that an amateur had crafted a scene, when they had fallen back on standard cheese during a big moment, when a character came across like stock footage.  But a few flaws can be expected by a first-timer, even forgiven if the quality of the film is high enough, and I think that applies here. Video – With an aspect ratio of 16×9 Widescreen, the video is nothing special.  It’s just an alright visual that sometimes felt like a made-for-TV movie.  Any imperfections were glossed over by strong acting and great music, but the picture quality just wasn’t impressive.

Audio – The audio of the disc was done in English 5.1 Dolby Digital, with subtitle options in either English, French, or Spanish.  With the music being the driving force of the film, the audio is often turned up during concerts, in headphones, and even in the background.  Guitar, drums, and vocals; that’s the music you’re in store for from this film, and that in truckloads.

Extras – There are many extras on the DVD.  Hear This Song is twelve minutes of behind the scenes and interviews with the cast & crew.  Hold On is a music video with Selena Gomez and Ben Kweller.  There are five deleted scenes, which can be played one at a time or all at once.  And there are two trailers: Boyhood and Men Women & Children. Recommended.  Rudderless is a surprisingly deep & touching musical drama with great acting and excellent original songs.  It has the feel of a low budget film and is directed by an amateur, but the heart-wrenching story and the passion behind it lift this film up to a level that’s pretty exciting.  Yelchin & Crudup have a great chemistry, play well together, and create an atmosphere that’s both entertaining and honest.  The video is only OK, the audio great, and there are a few extras on the disc.  Overall, a watchable movie with impressive parts.