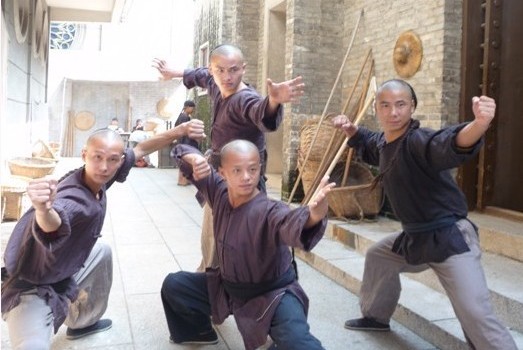 I think I’ve gotten in over my head.  First, I know nothing about kung fu or kung fu movies.  I didn’t even watch the David Carradine TV show, though I know when to use the term ‘grasshopper’.  Secondly, I know absolutely nothing about Chinese cinema.  I’ve never even seen Crouching Tiger, Hidden Dragon, though I understand what it’s about.  So here I come across a movie also about the Qing Dynasty, also about kung fu, though more about the martial art and less about the spirituality of the movement.  And when I go to educate myself, almost nothing comes up.  No pictures of the film, barely any info of those involved, and IMDb shows this as the first & only project of the director, writers, and actors.  Not a whole lot to go off of for someone who is out of their element.  But hey, I watched the film and can tell you what to expect from a movie standpoint, if not with very much added perspective. During the reign of the Qing Dynasty in ancient China, the country was sick & diseased, falling apart from within despite its glorious history.  The government was incredibly corrupt, abandoning the customary code of honor.  Foreigners were more present within the borders of the country than ever before, bringing new & destructive ideas with them.  And opium was poisoning the minds of the Chinese people, becoming an addictive drug that led souls away from the true joys of life.  It was a time of change and of despair, with the people hoping for a hero to raise them above the squalor that had surrounded them.  And as legend had promised, during China’s greatest need a hero would come, this time in the form of a man named Chen Xiang.

Xiang was the kung fu master of the South region, a trained fighter who spent many years living in a temple, learning discipline, technique, and how to become an honorable man.  After so long away from his homeland and learning all there was to learn, Xian returned to his city, finding it a shell of what it once had been.  Opium dens were everyone, killing his countryman with their foul poison.  The streets were lawless, no one was safe, his own family having been thrown out of their home.  And so, to combat this evil, Xiang would open up a new kung fu academy, teaching his pupils to live morally, to seek knowledge, and to fight for their country.  Many schools would join together, creating a force for good that would stand up to the injustices of the Qing government, changing the future together.

In the end, The Master would become a bit of a propaganda film, advertising the different styles of kung fu in ways that I really didn’t understand.  The North, the South, this style, that school; it’s not something I’m either knowledgable or passionate about.  A student of the art might view this film in a different way than I did, but I can only judge it as a movie, and from that perspective it was just OK.  It was slightly less compelling than Ip Man, a similar film in many ways.  Both are about kung fu schools, battling injustice, a master who is wise beyond his fighting skill.  It’s a simple but entertaining story line that doesn’t really get old and always feels classically grounded.

I enjoyed the fight sequences in Ip Man more, but those in The Master were just fine.  No flying, no magic, just martial arts, but still done well enough to impress the average audience member.  The story was easy to follow, the characters simple, and the outcome positive, making for an experience that was easy on the viewer and not overly complicated.  If you’re a fan of kung fu movies, it’s hard to tell where this one would rank.  It has a few good fight scenes, some side plot lines, and a good cast of characters.  But it won’t blow you away, especially if you’re like me and don’t know too much about the genre.  I’d be hesitant to recommend this film to many people, fearing that they would think it either not hard-core enough or too kung fu-y, extreme ends when the film probably falls somewhere in the middle. Video – With an aspect ratio of 2.35:1 (16×9 Widescreen), the video quality was quite good for a film that is almost unknown in the United States.  The picture quality was high, with nice color & contrast, and a good use of light & dark to play with the visuals of the scenes.

Audio – The DVD offers audio options of either Mandarin 5.1 Dolby Digital or English 5.1 Dolby Digital.  I chose to watch the movie with its native language, so I then had the choice between English and Spanish subtitles.  The sound quality of the film was average, with no glaring errors but lacking impressive moments.

Extras – The only extras on the disc are trailers: The Master, 7 Assassins, Warrior Princess, Game of Assassins. Rent It.  The Master is a movie that I can’t imagine many Americans loving.  For me, it was only OK, a kung fu movie that slightly entertained me for 90 minutes, but one that I forgot about quickly.  An aficionado of the genre might find it lacking, while your average audience member might find it pretty boring.  It’s not wonderfully exciting, but there is some quality in its simplicity, enough to bolster a good story and some good fight scenes.  The video was quite good, the audio fine, and there weren’t many extras on the disc.  Ultimately, a forgettable movie, not one that will excite much comment one way or the other, but one that deserves credit for holding itself up where I’m sure many others have failed.