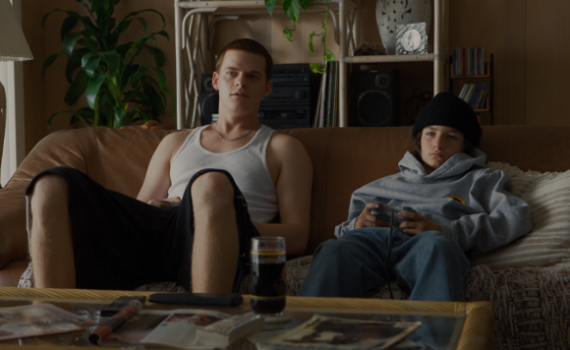 Stevie needs an escape, and the kids at the skateboard shop look cool, so in he goes to discover a new life. His mom had a rough start, had kids young, works hard to support her sons, and loves Stevie very much, but it as far from cool as the Sun. His brother, Ian, is private and angry and violent, hiding behind his neatly organized room and his expensively collected wardrobe because he fears reality. Which leaves Stevie on his own, but he’s about to find his true family, the boys on the boards. These skaters take nothing seriously and take no one’s shit, smoking and drinking and trespassing because they want to, not because they have permission. It’s a life that Stevie didn’t know existed, but now that he’s had a taste he can’t get enough, and his next choices will be his most pivotal, as a boy becomes a man amid the decay of the city and the influence of its forgotten children.

But life with this new crowd isn’t all sunny days and hot girls, these kids have serious problems and serious roadblocks in their paths.  Ray is the leader, and he could become a professional skater, but sometimes he feels like his friends are holding him back.  Fuckshit just wants to party, but has some talent of his own, and resents Ray for moving ahead and potentially leaving the group.  Ruben is poor, Fourth Grade is dumb, but Stevie loves them all, loves the kinship of the crew more than anything else, and just wants to be a part of something bigger than himself.  His family won’t like what he’s doing when they find out, and they’ll stop him if they can, though this skater life finally makes him feel whole, giving him a purpose that he never knew he was looking for. Jonah Hill is a first time director and many in this cast are first time actors, which only bolsters the feeling that we didn’t just watch a movie, we experienced a snapshot season in the lives of a bunch of local kids who have stopped giving a fuck and have started skating instead. This is the dirty secret, the harsh truth, the unblinking look, a map of mid-90s culture as followed by kids on the streets of LA, and here are the players to prove it. Hill grew up here, perhaps he was Stevie, perhaps he was a witness, but the nostalgia hits hard, even if this wasn’t you, because this team bring the story into your life as if it was. I didn’t grow up exactly like this, but a coming-of-age tale told this well and so starkly smacks everyone in the face with the same power, demanding that you turn your head to watch.

I liked Sunny Suljic in The Killing of a Sacred Deer and I loved him in Mid90s, a role he was perfect for, one part hard and one part pliable, a kid trying to do his best without a guide to show him how.  Lucas Hedges was a great evil older brother, with just a touch of sensitivity under the surface that was difficult to watch because it felt so fragile.  And the crew stole the show, this group of amateurs who were just here to skate, to help perfectly capture the mood of the time and the magic of the sport.  I saw it said that Mid90s is the first skate movie to actually be good, and I couldn’t agree more; it’s more than a message about the craft, it’s a kaleidoscope of tiny moments that together form something beautiful.  The grainy camerawork, the time capsule references, the freedom, the camaraderie, the off-the-wall humor; this film isn’t a masterpiece in oil, it’s a mosaic in graffiti, but no less stunning. Video – With an aspect ratio of 1.33:1 (16×9, 1080p HD), you’ll notice that the video is atypical right away.  It’s a boxed format, with black bars of the sides, and the entire film feels captured instead of staged, which is exactly what they were going for.  Some of the footage is supposed to be from the vantage point of a character’s handheld, Hill keeps that vibe flowing throughout, and the quality only lacks the clarity of modern blockbusters because he wanted it to.

Audio – The disc was done in English 5.1 DTS-HD Master Audio, and here’s where the film really shines.  Not only is some of the conversation during the movie about the music of the times, but those tunes are woven well through every fiber of the feature, until you become immersed in this world.  This is one of the better soundtracks of the year, with a ton of attention to getting this aspect just right.  Also available is English Audio Descriptive service, as well as English SDH and Spanish subtitles.

Extras – The special features on the Blu-ray aren’t plentiful, but they’re still worth a watch.  Audio Commentary can be enjoyed along with the feature, 3 minutes of deleted scenes can be viewed, and there are five trailers for other films available. Highly Recommended. Mid90s is a stunning debut from Jonah Hill, as well as one of the best films of 2018.  It’s audacious and uncomfortable, but it is also powerfully made, with a talent to capture the moment and to bring it alive today.  The music, the scenery, the skaters, that world; it’s all brought to us on a platter, uncovered at just the right moment, and served fresh; I’m not sure what else we could ask for.  Hill has a real eye, he tells his story with comedy, and he couldn’t bore audiences if he tried, so look out for what he might do next, because it could be anything and it’s bound to be good.  The video is sketchy on purpose, the audio is gold, and there are a few bonus features, so the technical aspects won’t let the plot down, and give audiences something extra to enjoy.  One of my favorites of the year, Mid90s is a rare gem and a movie worth watching over and over again.