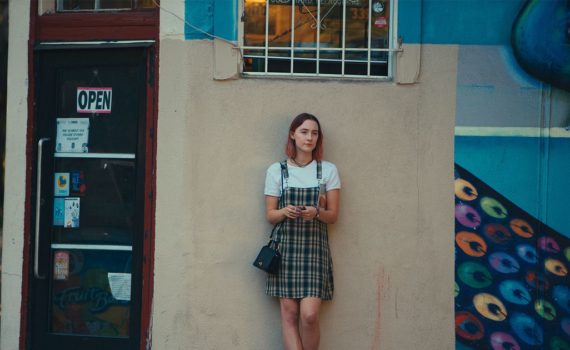 Greta Gerwig has been the offbeat, indie, New York apartment, Noah Baumbach, self-deprecating It Girl for years, to the point that at 34 she was starting to feel a little old.  She’s dabbled in co-writing, even co-directing 9 year ago, but it’s apparent that her artistic vision has always been directed by men, and the result has always been something that isn’t completely authentic.  Well, is it 2017 or is it 2017, and is this the time that women step into lead roles/jobs/positions or not?  There has been a modern sweep of feminism through our country, thanks in part to Trump, as much as it pains many of us to give him any sort of credit whatsoever, and the time to ride the wave is now.  Gerwig steps up, writes on her own, directs on her own, creates a mother/daughter narrative, and makes Lady Bird completely about herself.  What shouldn’t be surprising is that it all works to perfection, and what she made for us is nothing short of the best movie of the year.

Christine McPherson is tired of being poor and ordinary in Sacramento, of walking past mansions and wishing she had a different life.  So she adopts the name ‘Lady Bird’, refuses to answer to anything else, and demands that someone pay her some goddamned attention for once.  As her senior year begins, she tours local colleges with her mother, but sets her sights on east coast schools that she probably doesn’t have the grades to get into.  She auditions for the theatre production with her best friend, but really can’t sing strongly enough to get a great part.  She dates a cute boy named Danny, but he won’t touch her boobs, even though she tells him that he can.  Things just don’t work out the way Lady Bird concocts them inside her mind, and she’s getting tired of always getting the short end of the stick.  For once she wants more than her share; is that really too much to ask?

Write what you know, right?  It’s simple advice, but it makes complete sense, and Gerwig follows it to absolute success here.  She is from Sacramento, she graduated in 2002, her mother was a nurse, her father was a computer guy, she went to a Catholic high school, she attended college in New York; Lady Bird is her story, and you can’t get any more real than that.  The emotional connection was apparent from the very beginning and it never dissipated, the true story element woven within fiction was a beautiful thing to see.  Gerwig isn’t exactly an amateur, she’s been around a long time, but this was the first time she stepped completely out on her own, and I can’t be happier that she did.  I’m not the only one, critics have gone insane over this movie; it’s setting records on Rotten Tomatoes and currently has a 9.4/10 on IMDb.  What’s great is that it’s not all hype; this film is the real deal.

The first scene is pictured above, Lady Bird sleeping in a hotel bed with her mother, and I can’t think of a more perfect way to start things off.  It shows the reality of the situation (that they don’t have a ton of money), it shows the bond that these characters have (even though Lady Bird will jump out of a moving car in about 5 minutes), and it’s a wonderful metaphor for the beginning of motherhood.  From that shot on, I was hooked.  Saoirse Ronan has been hit or miss her entire, young career, vacillating between being American and Irish, but she’s coming into her own and we’re the ones reaping the benefits.  Grand Budapest, Brooklyn, Lady Bird; keep ’em coming, Ronan.  The supporting cast was incredible as well, creating these magical, individual roles that can somehow remind everyone of their own hometown: Metcalf, Feldstein, Tracy Letts, Lucas Hedges, Odeya Rush, Timothee Chalamet, Stephen Henderson.  And the dialogue wasn’t just funny, it was hilarious, tinged with nostalgic sadness that made it all the more meaningful.  I’ve been all about the “bonkers” films of 2017 when considering the best of the year, they are just so on point right now: Get Out, Mother!, Split, A Cure For Wellness, The Killing of a Sacred Deer.  But Lady Bird rises to the top as a coming-of-age drama that does everything right, a quietly amazing and stunningly simple piece of homage to where we come from that will pierce you where it hurts the most.