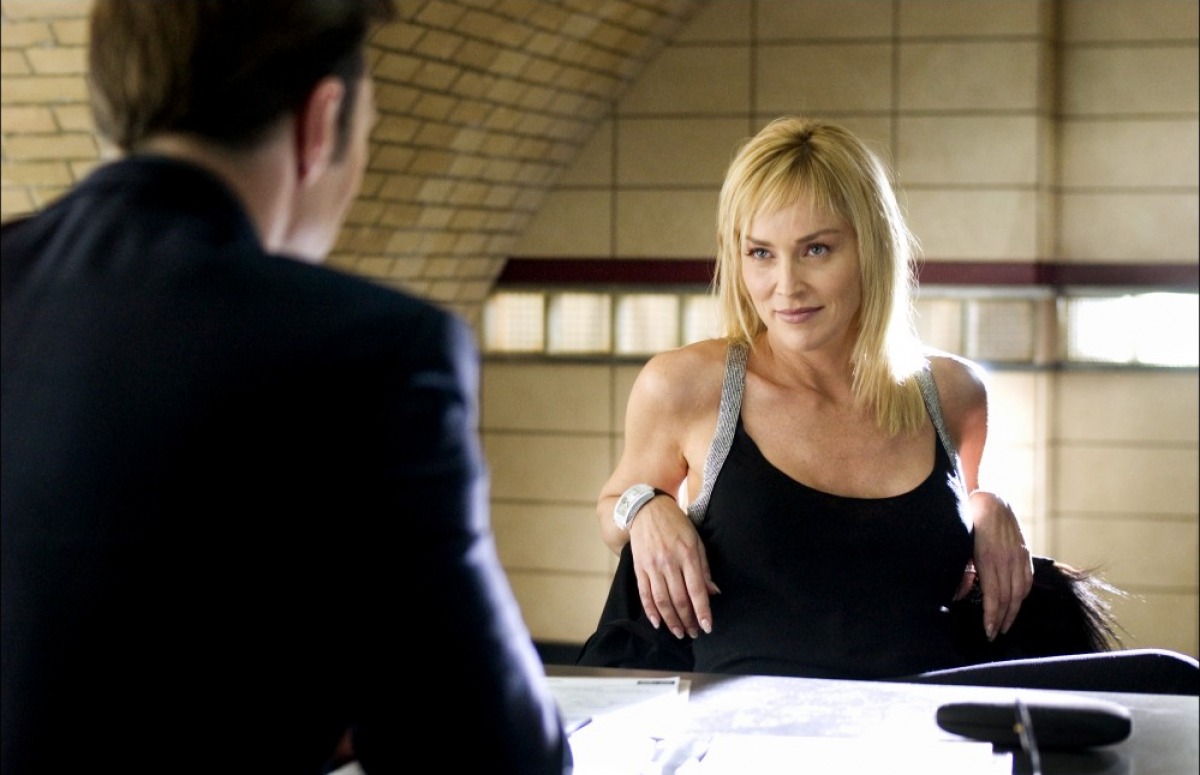 For boasting a star-studded cast and having been built upon a classic, albeit one of the cult variety, Basic Instinct 2 is shockingly bad.  I say that knowing that most will not be shocked by that news, because they saw the quality of this film coming a mile away, but I can’t let it slide upon its crappy sequel status and its lack of expectation.  Based on how well Basic Instinct works, and I should tell you that I think it works very well, its successor should have been better, simply better, regardless of how little we thought of its chances.  But this awful attempt at a steamy thriller is an embarrassment and nothing else, a gross byproduct of something much better that doesn’t deserve our time.

Catherine Tramell might have left San Francisco, but she didn’t leave her murderous murderess ways behind her as she moved to London, she kept those close to her blackened heart.  Not surprisingly, one of her boyfriends has ended up dead again, and she’s almost too guilty to be the actual killer.  She’s also too confident in her own ability to get away with the crime to be believed; is she a genius, a psychopath, or both?  She’s got most fooled, she has some turned on, some enraged, but she walks around like an untouchable goddess who can throw lives away on a whim, and she’ll continue to do so until someone proves that they can stop her.

Successful analyst Michael Glass seems to be her latest target of seduction and deceit, and he becomes her therapist after she is accused of killing her football star boyfriend, the first of many bodies that seem to keep popping up everywhere she goes.  Michael is entrances by her, in love with her, scared of her, and doesn’t know whether to turn her over to the police or revel in the debauchery.  She’s a slippery fish, and he can’t quite catch her, and perhaps doesn’t want to, because what would he do with her then?  People in Michael’s own life start dying, setting him down a path toward murder himself, but he might not be up to pulling the trigger, especially when it’s aimed at such a lovely creature. I knew that this movie was going to be terrible, we all did when it came out, there was no chance of anything else, and yet I’m still disappointed because something better should have been done with these characters and this back story; it had real potential once upon a time, but was apparently only strong enough for a one night stand.  Or else Michael Caton-Jones is no Paul Verhoeven, which is probably also true, exactly as 2006 David Morrissey is no 1992 Michael Douglas.  On every level, this sequel is a slap in the face to the original, a sad attempt at a cash grab that blows up in the faces of the filmmakers and the cast like a defective explosive, and an especially messy one at that.

That’s another part that makes me mad; the cast, because there are some gems here that deserved better.  David Thewlis is a treasure and was completely wasted, Charlotte Rampling is an icon and her name is sullied by this movie, and even Hugh Dancy deserves better than his stupid character and his minimal screen time.  Any positives were wasted as the negatives shoved their way to the foreground, and wow were they loud once they got to the front.  Sharon Stone lost whatever talent she might have possessed when she turned her body into plastic pieces, and she ought to be laughed off the stage from now on.  The writing was awful, the plot stupid, the sex silly, the thread nonsensical, and any inherent angst from the franchise was wasted on this complete failure, one that should never be references as a real film ever again.

Video – With an aspect ratio of 2.40:1 (1080p) and shot using Panavision cameras and lenses, the video quality of the film is so much better than its actual quality that there should be a law passed that says such disparity is now illegal.  The picture is clear, if tending toward darkness, and the interiors are interesting, but the visuals could not possibly counteract the cinematic problems that make up 99% of the rest.

Extras – There are a few special features on the disc, if you’re looking to torture yourself.  The theatrical version of the film is standard, but there is also an extended version available, although it’s only two minutes longer.  Audio Commentary for the movie can be turned on/off.  Between the Sheets is an 11-minute featurette/making of segment.  10 deleted scenes are available, with audio commentary options.  And there are 7 trailers as well. Skip It.  I would watch this movie again if you paid me, but we’d have to negotiate the terms, because it would take a lot to subject myself to such torture a second time.  I guess I’ve seen worse thrillers randomly on Netflix or Cinemax or whathaveyou, but none with this pedigree, none that should have known better.  That’s what makes this film so bad; it should have known and been better, but it was so poorly handled that it didn’t come anywhere close.  That makes it intrinsically worse, and I hated basically every minute.  The video was fairly nice, the audio was OK, the extras were unnecessary, so don’t look to the technical aspects to save the day.  Just stay far, far away, I think that’s best, and let’s pretend the 90s didn’t spawn all these attempts to recapture what we once held so dear.