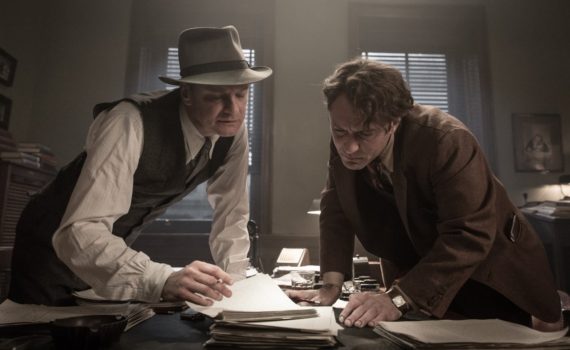 Michael Grandage has never directed before, not a short, a TV episode, nothing, which makes this 54-year-old 90s television series actor a very unique sort of amateur.  It’s fairly late for Grandage to get his start, but instead of taking a shot with an indie flick and hoping it gets noticed, he swings for the fences with Genius, a film that, on the surface, has Oscar potential.  Looking at the cast, you can only give Grandage credit for picking up such savvy veterans, for putting his movie into their more-capable hands.  Firth, Law, Kidman, not to mention Laura Linney, Guy Pearce, and Dominic West; this is a group who can carry a film completely on their own, the perfect team for an inexperienced director.  But it still has to come together, still needs some filmmaking talent behind it, and won’t magically coalesce around the cast without some other force applying the pressure.  Sadly, none of these things happened, and Genius could only drag along doggedly until it was put out of its misery by the closing credits. Based on the true story of the partnership between editor Max Perkins and novelist Thomas Wolfe, Genius is the tale of, well, genius, both at its productive best and at its self-destructive worst.  Perkins works for Scribner’s books, editing some of the best American fiction ever written, from F. Scott Fitzgerald to Ernest Hemingway.  Perkins is the power behind the throne, so to speak, the medium who channels the work of brilliant minds into something the less-brilliant public can consume, turning magic into something less and more at the same time.  What keeps him up at night is the thought that he makes a living out of cutting perfection to shreds, reshaping it into something more condensed, never knowing if the work he’s doing is helpful or just destructive.  But, writers need readers, and Max helps craft rambling volumes into readable iconic novels, doing his small part to make the art of the world.

When young, vivacious author Tom Wolfe meets Perkins, the two create an instant bond.  Wolfe is a loose cannon who shoots only words, mounds and mounds of words that never cease, words that can hardly be strung together.  And yet what he has to say is beautiful beyond description, setting Perkins to work with the knowledge that if he can only harness their power, these words will create something earth-shattering.  Wolfe struggles with self doubt, with drinking, and with the love of an unstable woman, forcing the stories out of himself while trying to cope with the surrounding world.  He & Perkins begin a relationship that is often beneficial to both, but can also alienate them from their loved ones, creating a father/son bond that is both helpful and harmful.  America is waiting for the next best book, and this duo will produce it, at whatever the cost. For what should be an Oscar-caliber film, based on the story and the acting talent anyway, after watching the trailer for Genius, I fully expected it to be one of the worst movies of 2016.  It wasn’t quite that, so let’s look at a few of the positive elements before we go into what went predictably wrong.  First, for a complete amateur, Grandage did make the smart choice of letting his actors do most of the work, of not overdoing the direction, of not trying to manhandle the movie into becoming something it could never be.  Secondly, the acting was good if not great, especially from Pearce & West, who popped up as famous authors and almost stole the show.  The drab color, the cold New York mood, the set and costume designs; if a dramatic period piece was what they were shooting for the result was pretty spot on.

But a good base and not too many mistakes can only get you so far, someone has to pick up the slack and win audiences over, and absolutely no one did.  Firth and Law were in a competition for who could pull off the poorer American accent, Firth battling through every syllable like he was in The King’s Speech 2, Law resurrecting his North Carolinian Cold Mountain character and hoping we didn’t notice.  I think we did, and I don’t think we appreciated it.  Firth, Law, West, and Pearce are all English, Pearce with a Kiwi father, Kidman is Australian, and Laura Linney is the only one here from the US.  Incidentally she was the worst of the bunch, but why was the entire cast made to do false accents?  It was apparent and didn’t help what was already going wrong.  The movie was simply boring, with too much angst and not enough substance.  We can only listen to poetic verse for so long before we start to drift away, something else is needed to keep us hooked.  The director wasn’t capable of control, the cast was oddly suited, and the pace was far too slow, leaving Genius as an easily forgotten film that perhaps should be tried again someday by a different and more appropriate team. Video – With an aspect ratio of 2.39:1 (16×9 Widescreen presentation), the video quality of Genius is not as high as it could have been, but perhaps as good as it needed to be.  The story is set in the 1930s, in drab New York buildings, often in cold weather, and so the video is as bleak as the film’s locale.  Greys and browns and ashen hues; it’s an ascetic, if not the most stunning one.

Audio – The DVD was done in English 5.1 Dolby Digital, with subtitle options of English, English SDH, or Spanish.  That’s it for the audio, and the sound quality of the movie is just as boring.  There is a mildly interesting soundtrack, especially if you enjoy music from this time period or jazz in general, but other than that, there’s not too much remarkable happening.

Extras – There are a few special features on the disc if you’re interested in learning more.  Genius of Genius is a 14-minute behind-the-scenes and interview segment.  Painting a Portrait of the Lost Generation is a 15-minute look back at this time period and its characters.  And Also from Lionsgate is a collection of five trailers: A Hologram for the King, Mr. Holmes, Indignation, Touched with Fire, Miss You Already. Rent It.  Genius is a good idea that never developed into something interesting enough to be a good film.  With an amateur director and an all-star cast, there was some hope that some magic could happen, that a true story could be told by true talent, that the result would be fascinating.  But the film was never that, instead becoming something boring rather than interesting, a slow reveal instead of a curious peek.  The video was fine, given the context, the audio was nothing to write home about, and there are only a few extras for those few who might have enjoyed this movie more than I did.  I can’t say that I enjoyed it much at all, but rather found it a mild waste of time.  The background was there but the execution was not, resulting in a wasted effort.