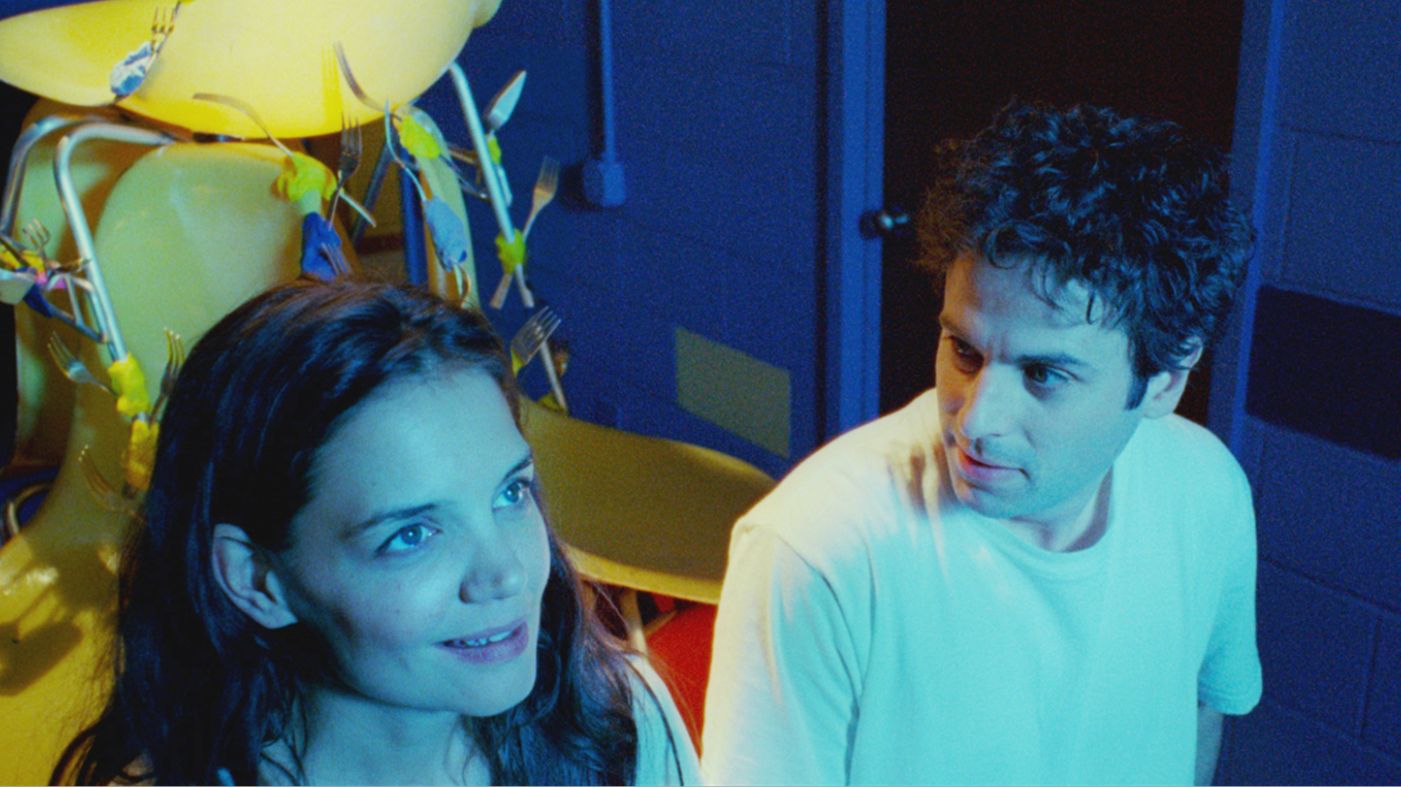 We’ve pretty much given up hope on Katie Holmes an an actress, ever since her downward spiral with Tom Cruise.  Dawson’s Creek ended in 2003, Batman Begins was 2005, and since then we’ve seen a whole lot of either nothing or worse than nothing from Miss Holmes.  Mad Money, The Romantics, Don’t Be Afraid of the Dark, The Son of No One, Jack and Jill, Days and Nights, Miss Meadows, The Giver; most of these I hadn’t even heard of, others I cringed when I saw.  But it would be too quick if we were to write Katie Holmes off completely.  She obviously had talent, got mixed up in a confusing life, and hasn’t found her stride since.  So although her role in Touched with Fire will not go down in the books as the comeback of the century, it just might be a glimmer of hope for a career that hasn’t flatlined quite yet. Marco is bipolar.  During his highs, he can spit rhyme with the best of them, even styling himself with a poet name, Luna, when he’s writing, rapping, or just seeing the world through an artist’s eyes.  His mania fuels his creativity, but also allows him to believe that he might be from another planet, since he feels so out of touch with this world.  On the flip side, his depressive states are just as low as his manic moods are high.  Depression, suicide, complete isolation; just a few of the fun facts faced by those with this illness, though in Marco’s case he hates when it’s called that.  He despises his condition, but also loves it, and the same could be said for the way he feels about himself as a person.

Carla is bipolar as well.  She writes volumes of poetry, using her ups as a source for inspiration, though her downs tear she & her family apart.  Recently, an obsession with her disease led her to a local mental hospital in the middle of night on a search for records.  Accidentally (and voluntarily) checking herself in for the night, the staff later won’t let her leave, with the doctors there understanding that she’s just not well enough.  In the same institution is Marco, also victim of a manic night that led him to this place.  The pair meet, comprehend each other, and begin to fall in love.  But on the outside, in the “real world”, can they make it as a couple or will their illnesses drive each other to dangerous extremes? My wife is a therapist, and I wish I had her input concerning the psychological aspects of this film, because it seemed to me to be an extremely upsetting but accurate representation of what it must be like to live bipolar every day.  We get to see the entire gamut of this condition, even if we aren’t entirely comfortable or ready; artistic outbursts, delusions of grandeur, emotions felt to a higher degree than most of us can even imagine, little sleep, complex & absurd theories, the crash that follows such a high, the depression, the meds, the suicidal thoughts, the comprehension that this disease prohibits a “normal life”.  It’s difficult to watch at times, but always feels honest, always comes across as telling the terribly tough side of an all-too-true story.

Give credit to the two main actors, who never turned the movie into a farce or joke of any kind, who always seemed believable even in the face of unbelievable circumstances.  Luke Kirby, who is no big name, was more than solid as Marco, manipulating the character into someone we could relate to, although the way his mind works is so different from our own.  And Katie Holmes, who seemed to have left the craft behind, was back on point here, playing Carla as well as can be expected for what must have been an extremely challenging role.  The film as a whole meandered a bit, rode the roller coaster of emotions a bit too literally, when the story staying centered might have helped audiences understand the characters’ imbalance all the more.  Director Paul Dalio is a complete amateur, but for his first shot at directing (especially for a film he also wrote, edited, & composed music for), I’d say there’s more good things to come.

Video – With an aspect ratio of 2.40:1 (1080p HD), the video quality of Touched with Fire is on par with other Blu-ray discs, though not the more action-packed or those that focus on video quality for their success.  This is an emotional drama; the visuals are based on feelings, not stunning effects, but the Blu-ray still delivers a high quality image throughout.

Audio – The Blu-ray disc was done in English 5.1 DTS-HD Master Audio, with subtitle choices in English, Spanish, and English SDH.  The audio quality of the disc is fine, with a unique blend of original music that aids in the mood of the film.  Those looking for stunning Blu-ray sound might be disappointed, as dialogue in more in focus here, not sound effects.

Extras – There are many extras on the Blu-ray disc.  Audio Commentary is available with Paul Dalio (writer/director) and Kristina Nikolova (producer/director of photography).  Making of Touched with Fire is a 9-minute behind-the-scenes featurette.  A Conversation with Paul Dalio and Dr. Kay Jamison is a 4-miniute sit down with the director and the author.   There is one deleted scene, Planning for Apocalypse, which runs 1.5 minutes.  Also available are a photo gallery, the theatrical trailer, a bookmarks section, and previews for films also from Lionsgate: Miss You Already, Stonewall, Mr. Holmes, Love & Mercy, The Confirmation.

Recommended. For Katie Holmes, this movie marks the return to a career that seemed so promising but was cut short by poor life choices.  She’s still a talented actress, though one who has been hiding her natural gift for some time now.  Combining her acting with that of a promising young man in Luke Kirby creates a pretty powerful film that won’t be knocked for its leads.  The subject matter is also strong, with a no-fear approach to the topic that might not be for everyone, but should impress those ready for heavy lifting.  The director is not experienced, the film isn’t perfect, but it does offer an honest look at a difficult subject, and for that deserves much credit.  The video is nice, the audio is fine, there are extras galore, and the Blu-ray disc as a whole delivers on its promises.  Watch with a warning toward the weight of the story and the inherent imperfections, but otherwise watch with confidence.