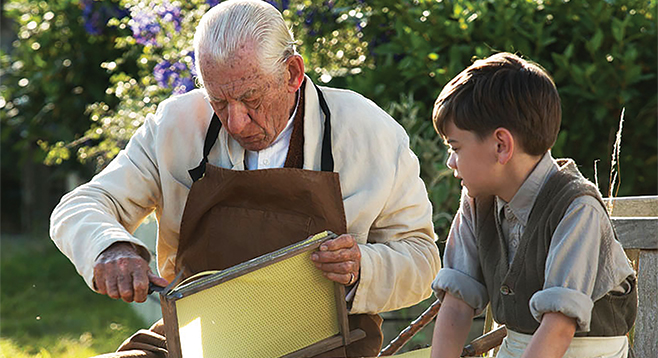 Bill Condon & Ian McKellen paired up 17 years ago with Gods and Monsters, another film about the last days of a famous Brit.  Dramatic biographies seem to be their forte, at least when working as a duo.  But Condon is a highly diversified director with a strange filmography: Kinsey, Dreamgirls, Twilight, The Fifth Estate, 2017’s Beauty and the Beast.  So it would be difficult to nail him down with a certain style, but when McKellan jumps on board, prepare yourself for a fictionalized true story, one with its fair share of weight.  Sir Ian, well we all know him as Gandalf & Magneto; those roles have dominated his career for the past 15 years.  But before that it was all dramatic work, like Gods and Monsters, like Apt Pupil, and like Mr. Holmes, a return to the deep.

Board a train and arrive behind the scenes of the greatest show of the century, Sherlock Holmes and his wild tales of crime & passion.  But the truth is that the stories written about Mr. Holmes were dramatizations of his real cases, imaginations of a passionate Watson, the truth being much less exciting.  And so we find Holmes at the end of his days, retired to the seaside, living out his remaining years in peace among his bees.  We meet his housekeeper & her bright young son Roger, a boy eager to help a legendary old man.  And what Holmes needs help with is remembering, as his mind slowly slips away, the mind that made him famous.  He wants to recall every detail of his very last case, the one that forced him into retirement, and the lesson that it surely taught him, if he can only remember what it was.

Mr. Holmes is as much about getting old and setting things right as it is about the world’s greatest detective, and the film makes sure to emphasize that concept.  Holmes is obsessed with mental rejuvenation, trying desperately to remember that last case before it goes completely, or before he dies.  It’s a sad look into degeneration & aging, with Roger playing the role of the epitome of youth.  Credit Condon for crafting the plot seamlessly, despite their being three consecutive story lines with three Holmeses of different ages.  McKellen pulled that off without too much effort, no surprise there, and Parker as Roger was a fresh face to enjoy.  Laura Linney though, I don’t know why people always think she can be English or Irish or do whatever accent; she’s from New York.  But the rest of the movie was good, if not anything spectacular, and if you like McKellen there is nothing to dislike here.