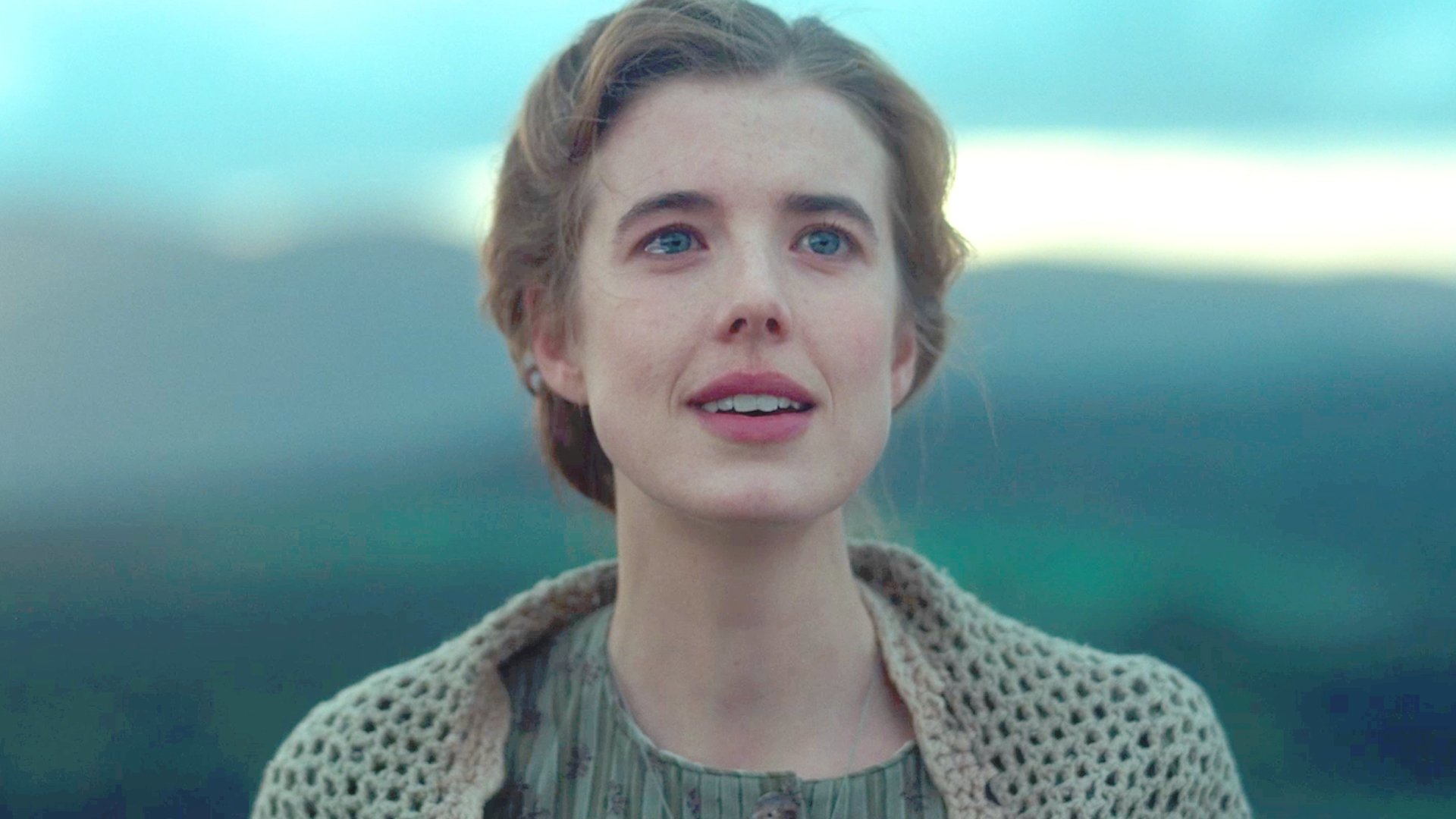 Being a movie guy rather than a TV guy, I’ve always been a little behind the trend when it comes to hit shows.  I don’t mean the old brand of sitcoms or hospital dramas, I mean the new wave of high-quality, well-acted, adult-themed original series that seem to force audiences into weekend binges.  Mad Men, Game of Thrones, Orange Is the New Black; shows that like, and although I accept that they are good, I’m always too busy watching movies to get on board.  I was one of the first on the Stranger Things train though, I am all caught up with OITNB, and recently I’ve been falling in love with Downton Abbey, a series that should be added to the ever-growing list of must-sees.  It’s much more a soap opera or melodrama then these others, and its time placement keeps it original as well.  The reason I bring it up is its relevance to Sunset Song, a movie from the same period, dealing with some of the same themes, but told through the eyes of the working woman instead of the wealthy man. This is the life of a young woman named Chris Guthrie, a girl growing up at the turn of the century in Scottish farm country, trying to make her way as tradition crashes into modernity and some small villages fight to hold on to the old ways.  Chris worked alongside her brother on her father’s land, while her mother took care of the two small boys and two baby girls.  They were a close family, drawn tighter by their father’s sudden bursts of anger and generally sullen manner.  But you didn’t complain, you took your beating, you turned your head, you did your work, and you dreamed of the day that you would become an adult; free to make your own choices, free to go where you wished, free to become whoever you wanted to be.

For Chris, death & tragedy would appear around every corner, limiting her options to a very simple one; stay on the farm.  As she grew into a woman with a youth’s curiosity and a grownup’s sense of duty, she would establish herself as part of the land itself, as a Scot who lived & died by the traditions of her people.  Eventually, Chris would fall in love, get married, and begin a family, but death was never far away, and as WWI began, it would creep closer with every passing month.  Scotland would not remain isolated, and neither would the Guthries, as the war in Europe spread and patriotism showed its uglier side.  Sacrifices & choices; they made her life, and Chris quickly became a spectator to the results of her own decisions. I doubt I’m the only one who is fascinated by this time period, a turning of the clock but also a transition to a modern world.  Sunset Song captures the last years of simplicity before the world joins together not only to fight but to modernize, to prepare for a new age.  Cars, electricity, farm equipment; these things were spreading during this time, disrupting old routines but offering new chances.  This film shows a country grasping at its traditions, all the while preparing for change.  Chris is that theme personified, a girl connected to the earth she tills but also dreaming of a world in which anything is possible.  The old ways make her feel safe, but nothing gold can stay, and in every life there are times when disaster forges a new & unexpected path.

As far as the film itself goes, you aren’t going to see something more beautiful this year or probably next, the scenery becoming a continuous painting, one that you can’t take your eyes off of.  The Scottish countryside is idyllic, the cinematographer capturing every misty morning image & breathtaking sunset perfectly.  The house in which Chris lives, the clothes of all the characters, the farm itself; this film it something special, visually.  Beyond that, there’s a simple story of a girl, the deeper metaphor beneath it, and the music of the land, all of which are to the movie’s credit.  But the acting and the pace won’t stun you, they’d be much more likely to lull you into a hazy sleep.  The film is a bit slow, led my a capable but not brilliant Agyness Deyn, and plods along at times, with some underscoring poetry the may be beautiful, but isn’t captivating.  That’s Sunset Song in a nutshell; lovely but a bit heavy, good but not magical. Video – With an aspect ratio of 2:39:1 (Widescreen), the video quality of this DVD disc is probably the highlight of the film.  It was shot using an Arri Alexa XT studio camera with  Zeiss Master Anamorphic lenses, and also an Arriflex 765 camera with Zeiss 765 lenses.  The cinematography in stunning, the locale wonderful, and the visuals there to please the eye in every scene.  The color, the clarity, the precision; all outstanding.

Audio – The DVD was done in English 5.1 Dolby Digital, with subtitle choices in English Theatrical, English SDH, Spanish, or French.  The sound quality was high, with a nice background track throughout and clear audio.  If you aren’t used to these accents though, you might be in for a surprise, the characters can be hard to understand at times.

Recommended.  There’s more here experientially than there is contextually, resulting in a film that’s nice to see but not that fun to watch.  Well, of course it’s not fun, the story is heavy, dramatic, sad at times, and very real.  What I mean is that there isn’t much for audiences to enjoy, to grab on to, to remember the next day.  It’s a fine film, looks great, sets a serious tone, but fails to reach the next level, a place where we might love it rather than just like it.  The video quality is excellent, the audio fine, the extras nonexistent.  Sunset Song is a slow-burner that never quite catches fire, a smouldering drama that fizzles into smoke just when you hope it might burst into something grand.