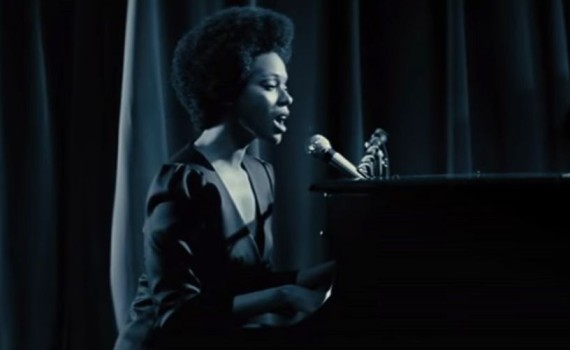 I didn’t understand the controversy at first.  I thought, well so what if Zoe Saldana is a little lighter skinned, that’s no reason to keep her from playing the role of a darker skinned woman as long as she has the talent to do it.  Sure, she should ideally look a little like Nina but it isn’t a necessity that she look exactly like her.  Yeah, so that was before I saw this trailer, but now I understand.  They took a light-skinned Black woman and made here …blacker? …so she could play this part?  Wasn’t there anybody else who was equally talented that you didn’t have to morph using obvious makeup & overdone prosthetics? Geeze.  This film really opened itself to unneeded controversy by casting someone that didn’t look like the real person AND THEN forcing her to try to look like the real person.  Dumb, really.

That’s too bad. I’m a hhhuuuuuggggee jazz fan (check out Bird, the Clint Eastwood bio-pic about Charley Parker) and I was looking forward to this one and the Miles Davis movie coming out. Sounds like they should have gone the same route that Danny Boyle did when he had Michael Fassbender play Steve Jobs. Fassbender didn’t look anything like Steve Jobs, but he was talented enough to pull it off the role. Still want to check out this movie though.

I can’t agree about still wanting to see it, but then again I absolutely hate jazz, so I guess we’re coming from different places.