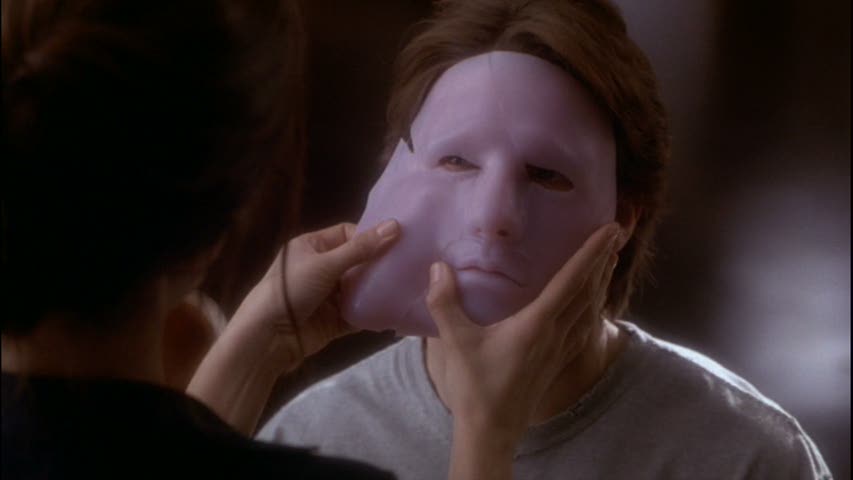 Vanilla Sky is what you get when you combine American Beauty and Inception, and that’s ignoring the fact that it’s a remake of Abre Los Ojos, released four years earlier.  It’s a giant experiment that plays with art and thrills, and for the most part works, especially when you’re young and fascinated by what filmmakers are willing to do.  Cameron Crowe was willing to play with music and mood and memory, much like Christopher Nolan has always done, and for a director who usually deals with smaller storylines, it was an awful risk.  At the time, critics weren’t fans, although audiences were.  Well, I was an audience member then, I’m a critic now, and I’ve loved watching Vanilla Sky every single time.

Playboy and grown up little-rich-kid Davis Aames watches his life click by one meaningless experience at a time, from lavish parties to dates with celebrities, and he doesn’t seem to have the capacity to take things seriously.  He runs a giant media company, but only cares about himself, until the night he meets Sofia, and his life completely changes.  He falls hard, sees something greater than himself, but the next morning takes a ride with a former lover and gets into an accident that gruesomely disfigures his face.  Coming to terms with his injures and attempting to face Sofia is only the beginning of his problems; his entire reality begins to blur, and he can’t tell treu from false.  When he winds up in jail with a mask over his face, David will have to unravel the truth about what really happened, and try to understand what about his own life in no longer real.

The first thing that jumps out about Vanilla Sky is the cast, which is incredible.  Tom Cruise, Penelope Cruz, Cameron Diaz, Kurt Russell, Jason Lee, Noah Taylor, Timothy Spall, Tilda Swinton, Michael Shannon; even the not-so-good actors are perfect here, and the great actors are spectacular.  It’s a hell of a fast-paced story, filled in with slow moments of true love and real, unique dialogue, until the entire story is spun out like kite string, with the ending bobbing in the wind ready to go in any direction at any moment.  It’s a wild ride for sure, and you won’t see the oddities coming, they’re too numerous, and they’re so strange, but in the best and most entertaining ways.  The art, the music, the madness, the surprising comedy; this is a movie that marks your life when you see it, perhaps more so when you’re young, but it definitely doesn’t lose steam when you age.  It’ll always fascinate me, even when I watch it more critically, because while there are flaws, there are also wonderful successes.